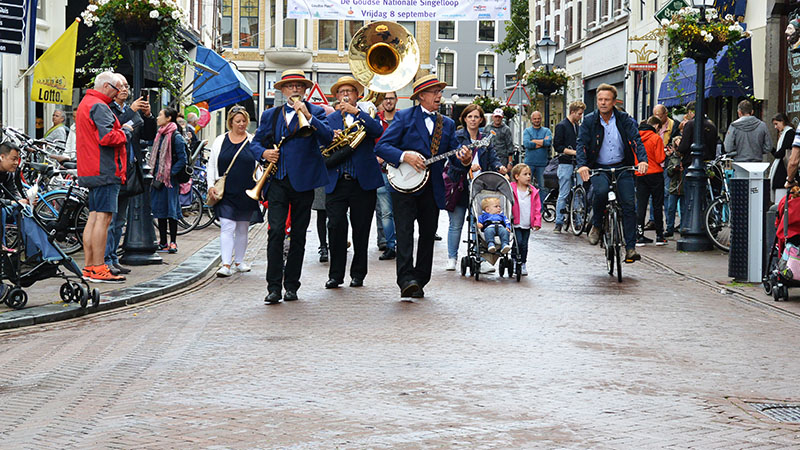 After almost two full days and a night of rain of rain, the skies commenced clearing around mid – afternoon: enough for Bob and I to walk the kilometre and a half into Gouda.

World famous for its cheeses, the centuries old tradition of the cheese market still takes place every Thursday – sadly, we missed this by two days. To our surprise, we learnt that the cheeses from Gouda are still made in the traditional way on the farms situated around the township and sold in ‘t Kaaswinkeeltje. By that, we mean it isn’t pasteurised. Apparently, the pasteurising process alters the flavour, so these particular cheeses – and there are roughly 40 odd to try – retain their unique flavours. Not exported, it is only possible to purchase these varieties of cheese here. Did Bob and I purchase any, you ask? No. Cutting down on our cheese intake, and tending to stick to sheep cheese when we do eat it, we chose not to.

The visitor discovers there is much more to Gouda than cheese, production, however, with stroopwafles also being on the menu. Covered with a layer of oozing sweet treacle, these waffles are apparently a taste bud’s delight and the tooth’s nightmare.

Entering the old town, we were greeted by two impressive sights as the Sint – Janskerk and Town Hall stood out from all other structures. Having read that the stained glass windows were well worth a look, I just had to go in!

The first mention of Sint Janskerk was in the year of 1280, and as with the remainder of the township buildings, didn’t escape the effect of devastating fires either. The church standing today was constructed after yet another fire blazed its way through the city in 1552,

so it probably isn’t over stretching the imagination to presume that more than Sint Janskerk was rebuilt more than once.

Diagram denoting the alterations undertaken to the structure over the centuries.

At 123 metres in length, it is the longest church in the Netherlands. Unlike in other townships, where the aim was to build the tallest structure in the country, living in a landscape where soils were extremely soft, the citizens of Gouda chose to construct the longest.

Impressive on the outside, it in the inner sanctum, however, that the church really shines.

History is everywhere, from the drawings

right through to the magnificent organ that proves quite overpowering to the eardrums when one stand directly beneath.

Gouda glassmakers were well renowned, and the visitor is awed by the 72 stained glass masterpieces,

many of which date back to the Middle Ages and Renaissance epochs, as he or she, wanders around.

I just loved that of the horse.

If one looks carefully, you espy the images that depict the wealthy patrons who donated monies towards the creation of these masterpieces placed at the base of each.

Also impressive was the section shown in yellow in the diagram above.

The floor was created from either brass or bronze, but we are going with brass. The image on the video showed it in its renovated glory.

The craftsman who created these carvings did a magnificent piece of work.

Entering the town square, we were greeted by the Saturday markets surrounding the town hall itself. The tantalising aromas of freshly baked breads tweaked the senses, whilst the freshest of fruits and vegetables beckoned. Alive and vibrant, in one’s imagination it was possible to picture the citizens of old hustling, bustling and jostling for the best of the fare.

Originally, the buildings in this age old settlement were constructed of wood. In early 1438, a blazing fire ripped through the township, reducing much of it to ashes. The original town hall didn’t escape unscathed, and the citizens made the decision to build the replacement on what was then the market field, well away from the main fare and fire free should the town once more catch fire. At the time, the market field was still very much a soggy, sopping peatbog and much work on reducing the moisture was required before construction could commence.

Directly behind the town hall, Bob and I found the old cheese weighing building, that is today the Visitor’s centre:

the carving above the entrance also denoted its past life.

Inside was a small display of weights, and so forth.

From there, Bob and I roamed the township, regularly coming across the trio from above who set the air alive with their sound.

Cobbled streets and hidden arches alongside of which ran the canals, many of which are no longer used.

Quite often, it’s the little things that assist in giving a town its character.