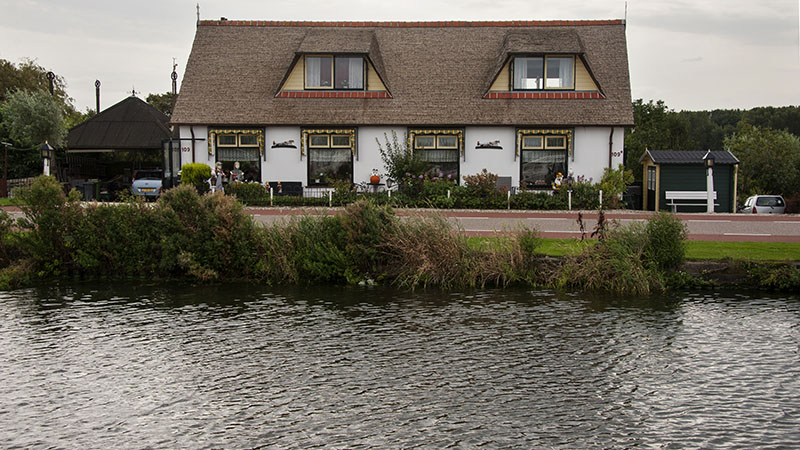 Yesterday, the intention had been to moor in Katwijk,

however a late start had us spending the night in Lisse. This morning, a morning trip should have put us there, however two bridges determined otherwise.

All was going well as the landscape was being admired.

Then bridge one, in the shape of a small wooden structure, struck!!!!!

What I had missed when planning was the small print, ‘Opened for special occasions’. Back to the drawing board, a detour was rapidly drawn. Round Gratis pivoted and off went we.

Now for bridge two, one for rail this time. Highlighted on the chart as a lifting structure, this was not the case. Of solid concrete, Gratis would not fit beneath. Having picked up an English handbook about Leiden some days ago, this promised to be a town well worth visiting. With the trip to Katwijk becoming too much of a hassle, the decision was made to pull into Leiden a couple of days ahead of time, then bike it to both Katwijk and Noordwijk instead.

Arriving at the junction, just ahead was a low non – opening wooden foot bridge. Silly me had mistaken the bridge for power lines.

Back to the drawing board!

A quick stop outside a set of shops that included and marine and hardware stores, then into Leiden Gratis motored. Heading past, the harbour appeared full, so on went we. Just past the second of the bridges a free three day mooring was sighted, and we took it!

Change of plans aside resulting from bridges aside, the morning was most enjoyable as Gratis crossed lakes and their nearby grasslands

upon which beautiful homes were placed.

An old tug now a punt,

a cow nibbling leaves from a tree,

and Egyptian geese parents with their babes – a first sighting for us (sorry, but it’s the best I could do)-

all kept the interest a – flowing!

A display of windmills dotted across the landscape kept the mind ticking as to what style each was. Most appeared to be used for pumping water.

Ground sailers are found where the wind can freely turn the sails. they are generally used for pumping water from the land.

This appears to be meadow mill. Also called an ‘Aanbrengertje’, it is used for draining water from low lying areas.

The sails on this beauty were being set to catch the wind.

When the wind is light, a cloth is placed on each sail to enable what wind there is to catch it. We discovered it is extremely effective.

Bikes unloaded and a quick afternoon tour for getting the lay of the land showed the book had been totally correct. Come on tomorrow!