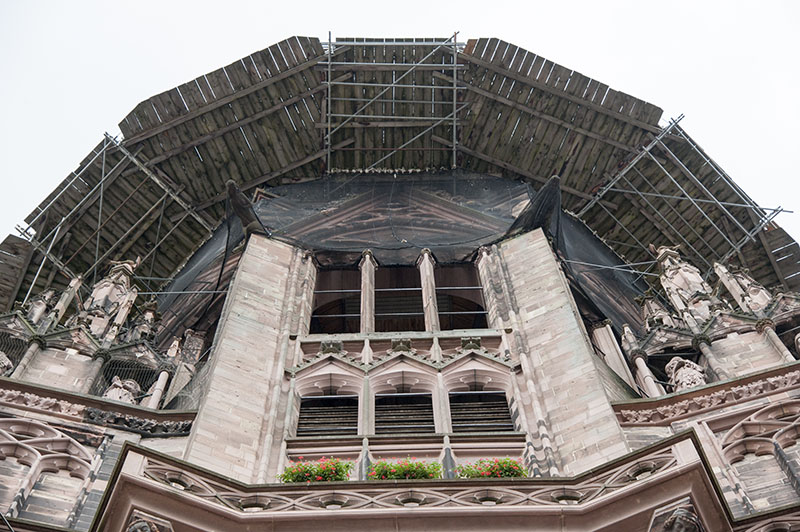 Freiburg im Briesgau is a town that ‘calls to me’, and was a place that I wished to share with Bob.

Disappointingly, a chill morning in which rain fell, meant fully exploring the township of didn’t happen: we so don’t do well in the cold!

The tourist on foot has the opportunity of entering the old town through one of two medieval fortification gates. What truly catches the eye are the cobbled streets in which channels containing water happily tripping along are inset.

These are called ‘Bächle’ – or small canals. It is believed they were used to provide water to industry and used as sewers. Today, water glistening and clear, children used them to sail their boats.

The other ‘must see’ is the Minster (Munster) that over shadows all beneath. Prior to the day of high rise, this would have been a vision espied from miles away.

Unlike the majority of churches of its day, this was not owned by the Catholic Church, but the people. Wealth created by the large silver industry, made it possible at the time.

Replacing an earlier church, building commenced during the 1200’s and it took a further three centuries before completion occurred. If one knows where to look, it is possible to find the juncture between the Romanesque and Gothic styles – one set of windows are narrower than the pre – requisite. At the main entrance, the visitor walks into the structure via its highly decorated 113 – metre tall tower that contains a total of sixteen bells (the oldest cast in 1258): This was the only German Gothic church tower completed during the Middle Ages.

The visitor really has to stop and look closely at the gargoyles, for they can be quite interestingly. Case in point isn the first one above.

Today the church is undergoing renovations that have been in process for the past ten years.

It appeared they were close to finishing. Even in today’s world of modern technology, the multitude of heritage buildings means the ancient skills of stone masonry and so forth are still in high demand. It’s fascinating to watch these workers in action.

The inner sanctum was dark and richly decorated.

This lifelike sized portrayal of the Last Supper was so detailed.

The stained glass windows are worth a closer look, as the guilds that funded them incorporated numerous symbols that identified them.

Outside, with its various detailed gilgoys, the town was a delight!

The carvings etched onto this door were finely detailed.

The town square – the Platz -was vibrant and food delicious.

Patterns were to be found everywhere!

That afternoon, the drive to the town of Bad Wildbad took us into the Nord Schwarzwald. This was forestry and nature park country. We lost count of the logs we viewed in the water so as to prevent cracking as they dried out.

As rain enshrouded the dark forests where wolves once roamed, one could see how the fairy tales of ‘Hansel and Gretel’ and ‘Red Riding Hood’ came to be.

Bad Wildbad was a spa town set within a peaceful valley. Thanks to the recently constructed Meister Tunnel, the majority of traffic was diverted Away from the township, allowing it to become practically car free. Here the thermal waters can be visited by one and all, and it’s the perfect starting point for hiking enthusiasts.

Our abode for the night, a tiny pension, that had recently been beautifully renovated.

Freiburg links (it’s essential to search under the heading ‘Freiburg im Briesgau’ as there is more than one ‘Freiburg’):