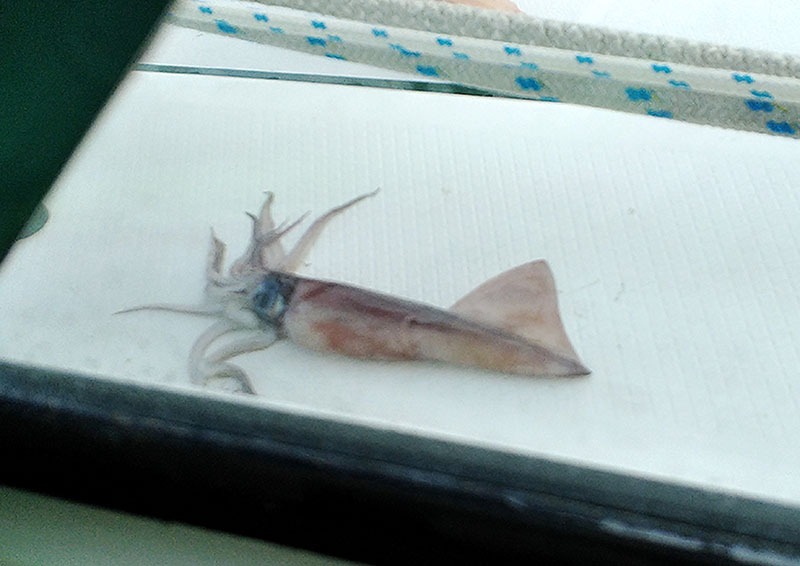 The albatross returned and entertain us this morning. Over our ocean travels, Bob and I had discovered why seamen of yesteryear were so superstitious on sighting these magnificent birds – in actuality, the reason goes for any sea bird. In lighter conditions the birds soar gracefully between the swells and over the waves but, as winds increase they disappear from sight. When this takes place, you know a strong blow is not far behind.

Today some of the albatross were defined by their black-and-white speckled wings – were these young ’uns, or simply a different species? Once internet connection was available, I was curious to know, so heading online found they could easily have been the Wandering Albatross or the Southern Royal Albatross. So, in glassy conditions here were those amazing birds entertaining us on the open seas.

We could even see a squid that had been washed upon the deck.

Wonder of the day was a tiny Swallow unexpectedly alighting upon Cliff’s hand whilst he stood outside a short break. For 10 seconds or more this little critter rested there before taking flight and heading off in the direction of Lord Howe Island.

As the morning wore on, clear cloudless skies were covered by a line of clouds that progressed from white to grey to black. With them, the winds returned and slowly increased in strength. Now, we were moving nicely once more.

The beautiful conditions all changed when mid – afternoon the skies blackened and within 15 minutes a squall was upon us! Looking towards its epicentre, we could count ourselves fortunate to have attained enough distance northward so as to miss the worse. At a guess, the winds were easily 40+ knots whereas we were only experiencing twenty-five on the outer edges. Australis 1 zoomed along as the sails filled with wind and pushed her at speed, shooting her out of the massive system like a bullet from a gun.

Midnight: nine hours and the winds still blew, increasing rather than decreasing, as we sailed by the light of the moon. Sustained winds at 25 to 30 knots sustained, just what we’d been hoping for. It was interesting, for that was the norm on our Indian Ocean journey, but where water there remained deep and sea state steady, those of the Ditch are anything but, and this is what gives the Tasman the reputation it is renowned for.