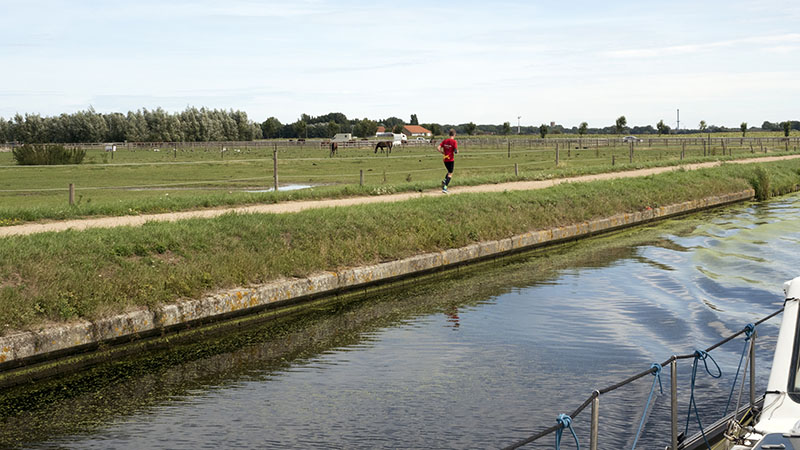 The morning was spent out on the bikes attempting to find cycle tracks into the exquisite de panne, all to no avail.

There were plenty of paths for walkers, but the closest the cyclist could go was around the perimeter.

We liked this critter…..

Then to the beach we cycled…….

What a beautiful piece of old resting between the new.

On board once more, it was time to undertake the 18km run on the Canal de Furnes to Dunkirk.

A couple of hours – what a breeze, one would have thought, but that was not to be the case.

A few kilometres and we crossed into French territory

on that wonderful sea of green.

2.2m was the official depth, but in actuality it sat well below at 1.8 – the lack of rain was having an effect.

Every so often, there was another reminder of the violent times past.

Arriving at Ghyvelde – the first of the lift bridges on along the route, the phone number provided in the book proved to be incorrect and a rapid message in French providing an alternate was indecipherable to us poor Aussies.

Out went Bob for a look. There was a sign post with another number to try, plus VHF 22. No answer on the radio, and another rapid message on the phone detailing an alternate number.

Just across the way was the bridge control hut and another boat moored. Maybe there could be some help there.

The helpful Belgians across the way showed us to a notice on one of the windows in the control hut. There was a new phone number there. With the assistance of the other couple, we were told someone would be there to open the bridge, but it could be an hour or so.

That was ok. Bob had time to install some new electrics for power, whilst I enjoyed the peace and kept a look out.

A couple of hours later, a lovely young gentleman arrived to allow us passage through. He was thunderstruck when, on mentioning how like a Spray our girl looked, to discover she was one. Over the next ¾ hours the lad and Bob had a lively conversation about Sprays, boats and sea travel in general.

On our way once more, we were provided passage through the second of the bridges, and what should have followed was an 8km free run.

These little fellas must have found it hard going.

Interesting times it was, as water depth rose and fell and the throttle was adjusted in accordance in an attempt to prevent as much drag as possible. Passing beneath one bridge, Gratis was left lifting up and over a hump as the depth dropped to 1.6m.

A few kilometres on and there was a sudden thump as the keel hit a hidden object below, then shaking vibrations as whatever it was was dragged along. A solid hit of reverse, then back into forwards and Gratis was free once more.

Edging ever closer to Dunkerque, we found ourselves passing motoring between an avenue of bushy green trees.

At one stage Gratis passed a group of eager fishermen.

17:30, and at last the lock was in sight. As we passed a couple of white boxes, the automatic activation set in motion.

That was quite a drop!

Gates open in went Gratis. On the right, towards the front of the lock was the activation button, however the mooring hooks were on our left.

a pole was used to set the release of water into action, and on a steady drop down we went.

Upon the gates opening, a waterway covered in a thick cloak of green greeted us as Gratis motored out.

Without warning, a thunk sounded from below and some throttle control decreased. Something on the prop was the guess. Several thrusts into reverse, then forward appeared to shake the unwanted hanger on off and on Gratis continued.

Around the next corner should have been our mooring. Covered in potted plants with ‘no mooring’ signs attached, the pontoons were moorings no more. This was a place where the homeless and more hung out: not a place for our girl.

Through the next lock we thought we would go, but closing time had taken place. Moor next to the lock was the thought, but on touching ground was rapidly revised.

It was now that we discovered the prop was still entwined in that object of mystery, as turning our girl became a work of art with lots of tiny forward/reverse bursts.

Facing seaward, ahead was a barge stop that proved the place to go. Making our decision on where to moor, Bob attempted to commence the process of manoeuvring for me to hook up the bow.

You can imagine his frustration, when on applying a sharp burst of forward Gratis remained practically stationary. Over the coming minutes, Bob worked with what power he could utilise to inch our girl dockside.

Rope in hand over the bow went I to stand on the chain. The bow in as close as possible at last I alighted, then hurried to wrap the bowline around the closest bollard.

From there, it was a simple toss of the stern line by Bob, so that I could also attach that and we were done for the day.

It’s a trip over the side to free the prop for Bob tomorrow.

The trip on this not oft used waterway presented the most exquisite of scenery and despite the hassles we really have enjoyed the motor.