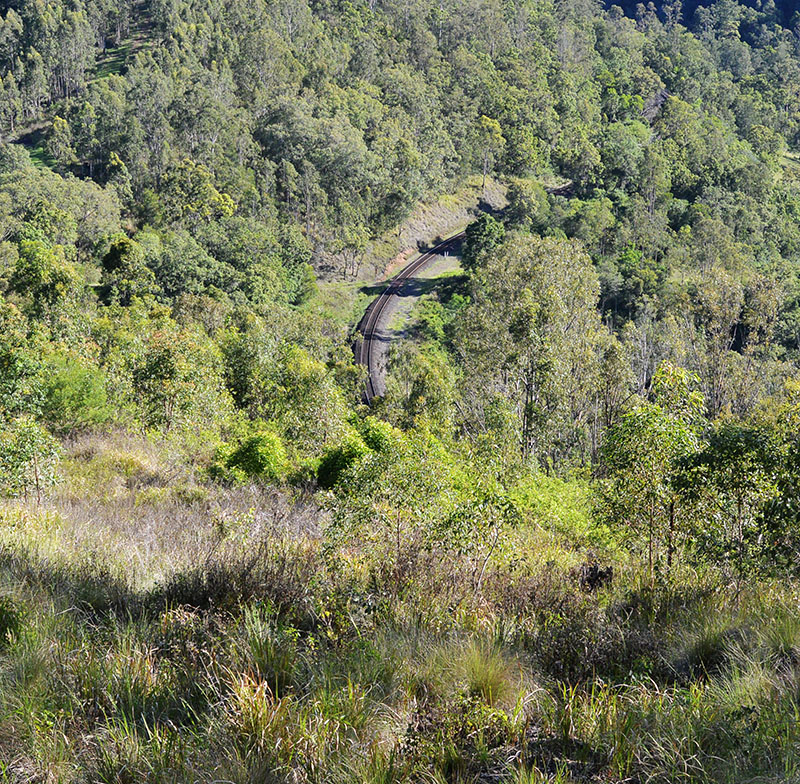 As per the norm during our stay here, the first in what became a chorus of bird songs over the morning awoke us at 4am. We had no idea what this particular bird is, but its noise reminded me a little of the bull roarer sound as it winds up: non – stop until way past sunup, it’s the alarm for those wishing to rise.

Our stay in this delightfully quiet caravan park had come to an end, as we exited the gate onto the highway: destination Andrew Drynan Park, Running Creek Road, Running Creek.

The first hour or so had us traversing terrain already covered during our trips to Christmas Creek, The lost World and Green Mountain section of Lamington National Park. Despite that, the ride was still interesting: with every passing day, the countryside becomes ever greener as the rains fall with increasing frequency bringing an end to the dry.

Yearlings romped, and herons prowled. It was interesting observing the relationships between various animals. The cow disturbed the earth as it grazed, and the white heron had learnt this unearthed its favoured scrumptious delicacies. This being the case, one sighted one – and in some cases two or three – of the birds keeping close to the Bovine, ready to pounce on their unwary prey.

Upon arrival at Rathdowney, the first left was taken onto Running Creek Road: a narrow tract of bitumen that led us toward Chinghee Creek and the New South Wales border.

The landscape brought to mind Mary Grant Bruce’s descriptions in her ‘Billabong’ classic where Wally returned to his Queensland home to sort out issues on his property. (Although outdated, this series is worth a read as it transports the reader back to the iconic ideals of the Australian back in the early 1900s. She was also one of the first authors who wasn’t afraid of telling the true facts and effects of WWI.)

Beehives around which the occupants buzzed, dotted the landscape – these Queenslanders love their honey!

and narrow bridges – many of wood that crossed the gaily tripping Running Creek, took us further into the ranges.

An occasional marker highlighted the depth flood waters can attain.

Cleared long ago, many of the slopes are now open grasslands where the beef cattle graze and fatten.

Eighteen kilometres later, Bob turned the Rolling G rig into an open parkland on ourleft. Towering gums and covered seating provided shade, BBQ areas were dotted around the park, and a set of brick toilets were the only amenities. To our right, was Running Creek. With its waterholes it was possible to partake in a swim to wash off the grime. No soap, however, for this is the habitat of the elusive Ornithorhynchus anatinus, more commonly known as the platypus.

Mid – afternoon, with the van unhitched, Bob and I hopped into the car and continued southbound upon Running Creek Road. Steep rolling hills with inclines of up to 17%, led us into New South Wales and the Border Ranges National Park, where towering gums and rainforest aligned the mountainous slopes.

Coming to Border Loop Lookout, we pulled in and alighted. Startled, tow pademelons skedaddled, whilst the piercing call of the Bellbird tinkled and chimed, deterring all other birds from entering its territory.

Scenically beautiful with a view into Grady’s Creek, with picnic area set up for the traveller, this is also the site of an historic railway loop situated almost 500m below. Constructed after WWI, this was the first standard gauge railway line to link two of our capital cities – Brisbane and Sydney. The conclusion of the Great War saw a time of massive unemployment and this project was a way of providing work for the returning men.

What makes the rail so unique is the way it spirals round the mountain in a steady climb prior to entering a single track tunnel that leads it through the hill to the other side.

‘Climbing almost non – stop at the ruling gradient of 1 in 66 or 1.5%, the line has almost continuous curves of 240m radius. Near Cougal, the alignment finally runs out of valley, and has nowhere else to go.

Fortunately, a convenient hill allows the line to circle back on itself so that it climbs 30m without having to make any forward progress. Soon after the border Tunnel under the watershed is reached, and the line descends on the other side. The spiral has two short tunnels, one where it passes under itself, plus another through a small spur of the hillside.

……… The structure has been heritage listed due to its historical, scientific and architectural rarity.’

A mix of scrubland and beef cattle farms it is an iconic Australian scene.

Bridges and road undergoing major reconstruction, a detour took us along a narrow track that wound its way around the mountain slopes.

In all, it was a delightful end to the day.