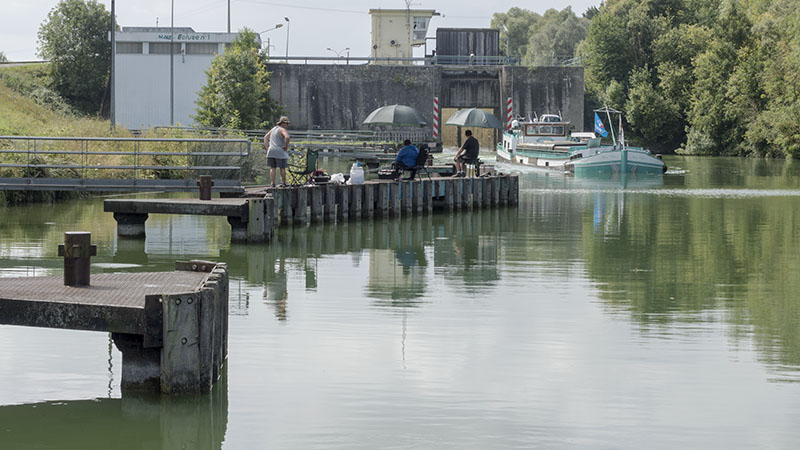 Canal du St Quentin was next on our list, however another spanner in the works came this morning when Bob went online and discovered one of the bridges has been out of action for the last two weeks with no date provided for reopening: this really has been a year for altering plans on the fly!

So down the Canal du Noord we head, with the intention to now turn west and head Rouen way at the bottom.

An early start, and a few kilometres took us from Canal de la Duele into Canal du Noord.

There was plenty of work going on!

With good stops few and far between, it was an easy, but long, day in which 10 locks were navigated.  Those upon Canal du Noord are not the most recent and are set for the barges. Heading south, the right side of the lock is the one to go to, as the bollards are spaced for the direction of the traffic flow. This meant we were able to hook the centre line to the ladder and stern to the bollard nearby.

Excitement – not – was had upon entry into the second lock upon Canal du Noord. In position to connect the centre line, all plans were blown to smithereens as the engine unexpectedly conked out. Still too far from the wall, there was no chance of connecting a line and bringing our girl’s momentum to a standstill.

Several attempts to restart Big Bertha, to no avail, meant Gratis continued gliding forward. With no chance of stopping 18 tonnes with one of the poles, all I could do was watch on as she ran into the commercial barge moored in front, whilst Bob continued attempting to bring Big Bertha back to life.

Thankfully, all that was damaged was the basket in which they stored one of the ropes, but you could say there was one exceptionally unhappy barge owner.

Another plus was, the locks were relatively narrow, and the flow of water created by the barge, aided by a push off by the owner, helped to send Gratis in the direction of the wall. Once close enough, it was possible to moor her, and Bob then went to try Bog Bertha once again.

A couple of cranks and there was the welcome thrum we are so accustomed to.

Once topsides, an amount was agreed upon and a happy bargee headed on his way. He was quite wary of our girl after that and chose for us to motor before him.

Having passed, Bob was in the process of gunning the throttle only to have Big Bertha undergo yet another hissy fit. Heading below, I attempted without luck to turn her over. She wasn’t having a bar of it this time.

Onto the radio went Bob, letting the barge owner know that we were without power and to pass us.

In the meantime, another attempt to turn her over saw success and Gratis just idled along – the problem was with putting on full power, it seemed. Manoeuvring their barge in alongside, at their insistence we tied our girl to it, whilst the skipper came on board to see if he could assist in figuring out the issue.

Through a process of elimination, they both have a feeling it may be muck in the exhaust, so there is another much detested job waiting for Bob. Gratis free once more and Big Bertha behaving once more, on both boats continued.

Taking care not to over tax her, the engine behaved for the remainder of our day’s journey.

6:30pm upon us, on exiting Lock 7, there a was an unexpected mooring in peaceful farming country just ahead of us. 8½ hours was long enough, so over we pulled for a good night’s rest.