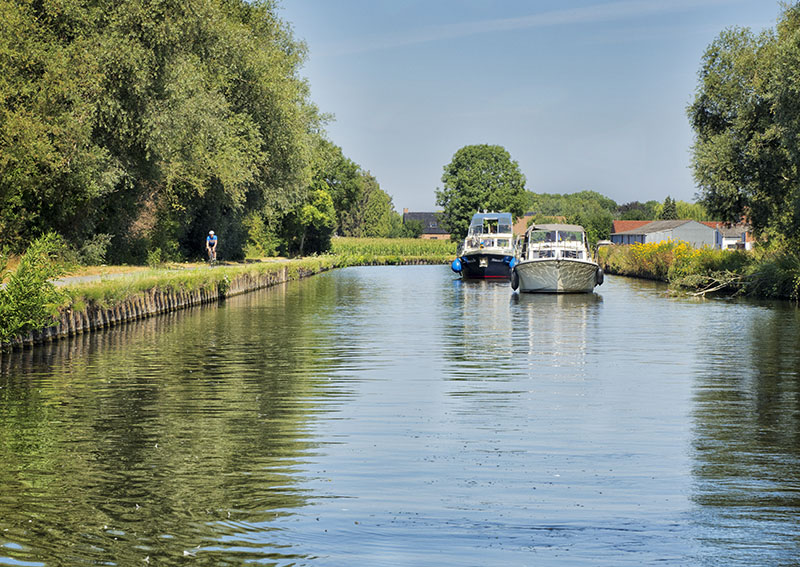 This was our first day on the Blaton – Ath Canal, and a beautiful one it was.

A mix of farmland

with the occasional township thrown in, this was truly a waterway for the nature lover,

and those wanting to have a break from the rat race.

As always, ducks and coots provided much entertainment, and the occasional glimpse of the vibrant blue kingfisher darting rapidly into the undergrowth caught ones eye.

Some of the locks had small cross currents upon entry, but they were nothing like those encountered on the Midi.

The lack of rain had affected the level of the canal with the lowest depth encountered being 1.7m, not a problem for our girl, thankfully. With a normal summer, we surmise the depth would remain a relatively stable 1.9m that was stated in the Belgian atlas and guide.

The lack of rain and fresh water caused a massive growth of green that the dragon flies loved.

Exiting the lock at Huissignies heralded the end of the day. Our lock operators would return at eight thirty the next morning.

This night would be spent at on a beautiful mooring just down from the lock, where electricity was provided, a picnic area on a manicured section of lawn looked out over fields in which cows grazed, and a small building housed showers and laundry.

There was also a small township, where one could purchase a few staples at a micro supermarket, but this was the last night it would open, since the owner was closing it a few weeks for a much required holiday.