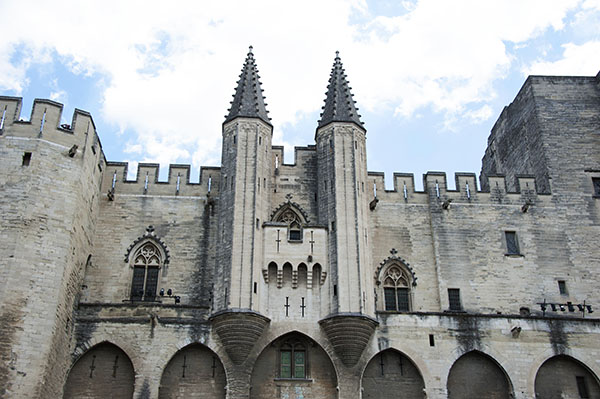 Prior to departing, Bob went through his daily check of the river information site (www.inforhone.fr). All looking good off we headed.

The scenery each day is a significant contrast to that of the day prior. Now, low cliffs aligned the west bank of the river by the 240km (pk in the books), the greens so much deeper – yet softer. Reed beds, small tow0ns of brown  stone, People running, fishermen with lines out and old castles lined the river banks, whilst a massif loomed in the distance far ahead.

To our surprise, despite the info Bob had read on the website, the current strength and turbulence was significantly stronger.

Water raced beneath the bridges – all of which were encountered in quick succession – where small whirlpools were created in large numbers. Going beneath the third – Pont de l’Europe a Avignon – the revs increased to 2400rpm and our speed down to .8km/h: of engine power to spare, there was only 5 – 10% to spare. It was about now that a discussion re turning back took place.

With only a couple of kilometres remaining until the lock entrance, the decision to continue and take stock of the situation at that stage was made.

The lock master radioed on VHF 22, we were informed that as the river was running at 3300m³/sec, the lock was closed to pleasure craft (10km in 2 hours had been a hard slog, so it was no surprise!). Above the red/green light at the entrance to the lock, a light board showing the letters ‘RNPC’

(www.inforhone.fr/inforhone/en/commun/carte.aspx?chapitre=naviguermeant) no pleasure craft allowed through.

Gratis moored in the calm waters just before the lock, the doors were locked and into Avignon – a short 3-4km distance away – we ambled through the peaceful country side to enjoy the atmosphere of the town.

Across the lock, looking down, there sat Gratis, a minute blip against the landscape.

Barges: one in, one out.

Past the power lines source by the hydro scheme.

We delighted in the atmosphere.

This little boy was entranced.

This busker was brilliant. It was the movement of his arms as he thanked a man for his donation that enabled one to realise he was alive.

Details upon many of the buildings enticed one to step closer.

They loved their dragons.

Into Palaise des Papes went Bob and myself. 20E thank you: it was worth it for the view!

A tidbit of history:

it was whilst situated in Avignon that the organisation of the Church order commenced changing. For the first time, administration services became centrally ordered. By the end of its 70 years in the township, the administration had grown from two to five hundred, in addition to one thousand lay officials employed through the Palais.

With the return of the Papacy to Rome, the palais itself remained in use as a result of the Papal Schism that took place. Lack of upkeep in the coming years found the structure rapidly deteriorating. By the 1700s, it was in a dilapidated state, but that didn’t stop the revolutionary forces from seizing and ransacking it during the French Revolution. Continuing forward in time, Napoleon’s forces used the palace as a barracks and prison. As with the Jacobin Abbey in Toulouse, this was when the greatest damage took place, as interior woodwork was dissembled and used to create stables,  whilst frescoes were covered.

Declared a museum in 1906, this was its saving grace. This largest of Europe’s Gothic Palaces is gradually coming back to life as a non stop effort to restore it continues.

With no furnishings, it really is an empty shell. The visitor has need to search for the tiny details – gargoyles

and so forth – that still remain and enjoy the brilliant displays the French restorers have created: note boards in a number of languages are available for the reader to peruse at regular intervals.

Upon entering, by looking upward frescoes were there for the visitor to view.

I loved the detail in this black and white:

Despite the wear and tear of time, the capitols still retained great detail.

Most frescoes were damaged beyond recognition,

but an occasional few were recognisable. The best could not be photographed.

Appearing to be undergoing renovation, this room was cordoned off.

The detail was so fine.

Paintings of people relevant to happenings at the time.

A bit of fun for Bob.

Despite all of the work, new cracks become visible.

The Palais exited, it was time to rest the feet with a tour of Avignon by their tiny train, then on to La Basilique Saint Pierre. In the scheme of things a plain church, but its carvings were so intricate and unusual that it drew the observer closer. Oh to be able to spend hours studying the detail. Today, a small choir added to the peaceful atmosphere as the visitor wandered.