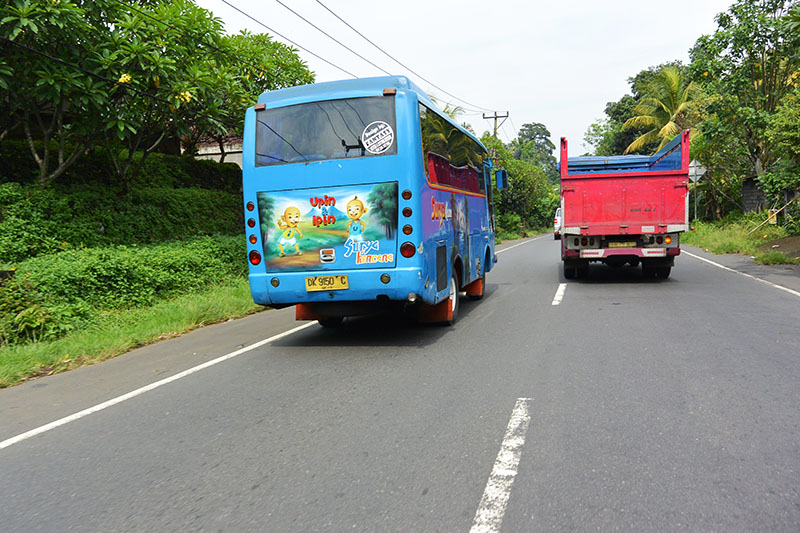 All the times we have visited Bali have seen us enjoying days of relaxing down time. In a first, Bob and I are here for two full months: a time in which we can alternate full on exploration with days of relaxation.

Today was a day of action. Bob always takes pleasure in circumnavigating the islands which we visit.

The day saw us cover a good portion of the island – the main intention being to check out the Tamen Nasional Bali Barat (Tamen National Park).

With the sea – for the most part hidden from view – on our left, and the mountainous West Bali National Park to the north village after village were passed through.

3½ hours later, we had a arrived at the park’s entrance. Partaking in a scrumptious meal at the Menjangen Resort, there would be no time this day for dilly – dallying, but our curiosity had been whetted: a longer visit will take place in the future.

It was here that tiny monkeys were espied within the undergrowth. Photos will have to wait until our next visit.

At this point, we discovered the return journey to home base would be faster if we continued onward over the northern part of the island. At 3:30pm, it was now a race against the ever – encroaching evening: there was no desire on our part to traverse unfamiliar roads at night.

At Singaraja, Bob turned the bike southwards. It wasn’t long before the bike commenced climbing, climbing, and climbing. Streets became ever steeper and there were times at which the bike was barely crawling. It was almost a case of finding ourselves walking.

As the altitude increased, low cloud became fog in which visibility was only a few feet. A light drizzle rapidly became a down pour, whilst the temperature dropped several degrees.

Two hours remained to our journey: Bob was feeling the cold, and I found myself already becoming racked with shivers. A quick stop at a small shop found us purchasing rain capes: there would be nothing worse than arriving home saturated.

At last Bob and I found ourselves motoring upon the ridge, which in itself wasn’t much more than four or five metres in width – in my eyes, that is. At times, homes could just be sighted resting upon the mountain slope. Now it was time for the downward stretch: past Gitgit falls and for a while the road took us along Danau (Lake) Beratan.

An hour to go and we at last turned into mainstream traffic. Curves upon curve we drenched explorers rounded. Now there was a warmth to the air and the lower climes were visible through the rapidly thinning fog.

At one stage, traffic practically came to a standstill and we soon discovered why. Over the past few days this region had been deluged by heavy rains, and water courses unable to contend with the sheer capacity had overflowed and now flooded the roadway. Heavy machinery – the first we had come across since commencing our Bali holidays – was attempting to clear the mud and build taller banks, but it was slow going. Water knee deep, Bob manoeuvred us ever onward.

Night comes early in the tropics and lights lit the sky as we entered the suburbs.

Ten long hours after departing, Bob and I at last arrived home. Posteriors numb and every muscle aching – how unfit we have become – a warm soaking shower was the name of the game: what bliss as the rivulets of water rained over our throbbing bodies. Bed! What heaven!!!!!!!