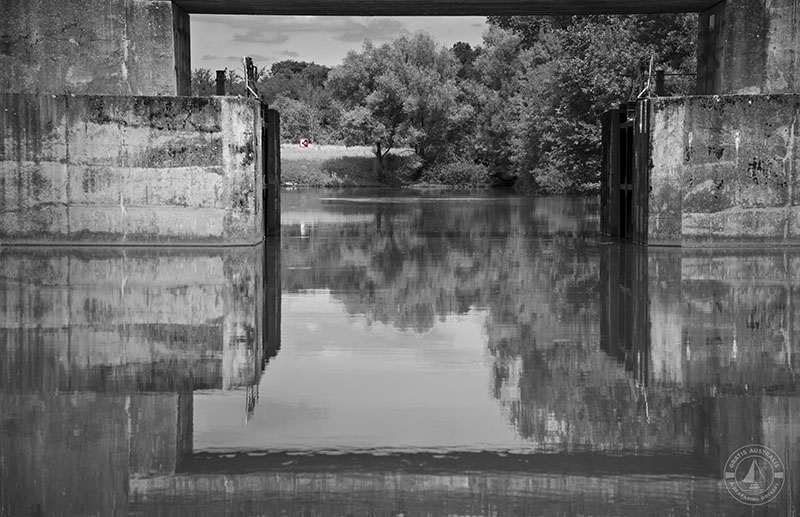 Countryside was much like that of previous days and Corre being a plain overnight stopover, there were no photos this day. This was an easy morning with just three locks to contend with and an afternoon for relaxing in Corre.
Despite being described as 1.80+ metres in depth, there were spots where the river was less – particularly at the lock entrances: Gratis with her 1.45 draft scraped bottom, particularly when entering the locks.
As always, one could never expect the lock setup to be identical. At Montureux, bollards set upon the top of the wall greeted us, whilst both wall and top were provided in the deeper Cendrecourt Lock. At the latter, the wall bollards were set quite high within on the right – hand side. Set up for mooring on the left – hand side, our starboard lines proved to be far too short, so rather than resetting the ropes, we found it was actually easier to climb the ladder on the left – hand side and connect to the bollards set upon the top of the wall there.
This was the day that beautifully patterned butterflies flittered their way in and around Big G.
Where there were no fields, the landscape continued to be densely wooded and Mistletoe had trees captured within its deadly grip. In these areas, the temperature fell a cooling 10°C. The smell of dankness and decaying vegetation set the nose wrinkling in disgust, as one held their breath to prevent inhalation of the foul air.
Past Ormoy, Gratis moved into country in which hay wasn’t the major produce: it appeared to be lupin and corn.
Arriving in Corre at long last, we were presented with a choice of two marinas: that run by Fluvial Loisirs, or the township’s – just past the Corre lock. Depth noted as 1.2m for the latter – far too shallow for Big G – Marina de Corre it was!
Only metres from entering Corre, the river split in two, with the Saone taking the left branch and Canal des Vosges commencing at the lock in the second.
It was the left fork we took, only to discover the depth was no longer that 1.6 metres described in the books, as Gratis dredged the bottom for some distance.
Into the well sign posted Marina we headed. Directed by a friendly office worker, Gratis was directed into a berth roughly mid – way down.

Much of the marina was designed for skinny boats and there wasn’t a great deal of manoeuvring room for our mighty Spray as she was edged into one of the few berths just wide enough – bow thrusters would have been very handy here – and fenders had to be taken on board for a short time, as they created more havoc than they were worth!


Electricity, powerful hot showers, this was a pleasant night’s stop, with an Intermarche close by for those needing to restock.
Our cruise upon the Soane had concluded, for on the morrow Gratis would enter the Canal des Vosges.