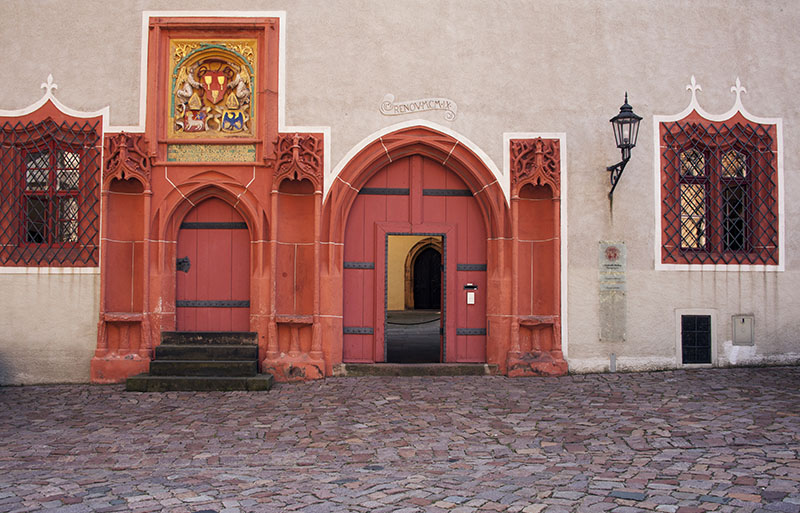 Narrow one vehicle roads led us through tiny villages and farming country where surprisingly large fields had replaced those typical tiny land plots that Europe was so well known for. Farmers here were busy turning the stubble.

By mid – morning we had entered the region renowned for Dresden China. A bit of prior reading and I discovered the township of Meissen was the place to visit, so we bypassed Dresden.

What a delightful town we found. Castle

atop the peak hillside peak, here was the best kept medieval fortified township seen to date. Meandering in low gear along cobbled streets, Bob drove the car through an ancient arch that was still attached to sections of walled fortifications.

In the Lutheran evangelical Dom,

visitors were privileged to hear an organ recital, where sonorous chords resonated through the building.

German churches are plainwhen compared to the French and catholic, but the concept ‘less is more’ is certainly the way to go.

It didn’t matter where one looked, there was always something more to find…

The town square of the Alt Stadt is where you come across the Frauenkirche Carillon, the world’s oldest set of chimes created from porcelain. Six times daily, a variety of tunes tinkle over the air. For fine views of the town, it is also ­possible to climb the stairs of the tower.

Alongside the town’s former abbey, was Albrechtsburg, a fifteenth century castle laying claim to being the first German castle planned and built for residential living. The fame of the palace is not for this, however. It was in this structure that the perfect blend for the making of European Porcelain was developed. Labelled ‘white gold’, it took scientists three years to create a feat that had been attained by the Chinese some thousands of years prior. 1710 was the year that production of this porcelain commenced in Albrechtsburg Castle. Half a century later, the business had become so successful that production was moved into the nearby specially constructed factory that is still in use today.

Then there was the aged town square…..

In all, Meissen was a delight!