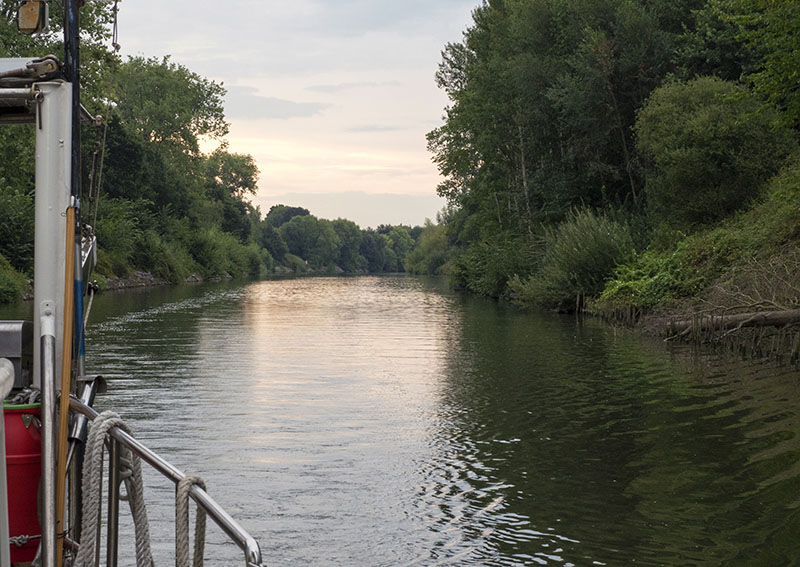 Over the past few mornings, Bob had been taking note of the times at which early morning barges passed through on their way to Zeebrugge and Oostende.

Departing just ahead of one would provide us with the best chance of least waiting time for bridge and lock openings.

With a long day ahead, and movement through Bruges only possible via convoy, it was an early morning start this day.

Late dawn upon us, grey skies greeted us as Gratis glided away from the mooring.

In some places, large barges lay at rest, their owners still in deep slumber.

Lone wading birds, well camouflaged in their cloaks of browns and greys, fed upon miniscule critters along the canal’s banks.

Surprisingly, it was an easy run and we soon found ourselves passing beneath the open flood gates that were situated not far from Bruges.

The exiting barge meant there was no waiting time for us.

There is always work to be done.

An old lighthouse ship added colour to the scene.

Arriving at the first of the low bridges in the township, Bob and I found a pleasure boat already tied upon the canal bank in readiness for passing through, and it wasn’t long before a third arrived behind us.

It was with surprise that the light upon the bridge turned to red green, and the road booms lowered: It appeared three pleasure craft were enough to merit the passage through the township.

Past a set of town gates.

Bridge after bridge was open waiting, along the route to the lock. Arriving here, we discovered a large barge exiting toward us.

A round structure comprising three sets of lock gates, that to the north was now closed to traffic. Our passage was leading us westward for now.

Upon exiting the lock, a commercial barge ahead of us had recently entered the canal leading to Zeebruges.

Through the winding curves went we, until passage beneath the aged train bridge led us into open countryside once more.

We loved its architecture.

The closer to the coast we three travelled, the more threatening became the clouds.

A few short hours and we were at the lock that led us from Canal Gend Ostende onto Canal Plassendale Nieuport.

To our immense disgust, the rain commenced falling and didn’t let up for the 21km journey upon this much narrower waterway: With what appeared interesting townships along the way, we look forward to our return journey when Ypres and Calais shall be visited.

For today, the destination was Nieuport, where Gratis would be lifted upon the morn.

Arriving at the outer edges of the township, where the junction to the Yser is found was Westhoek Marina: that would be our mooring for the night.