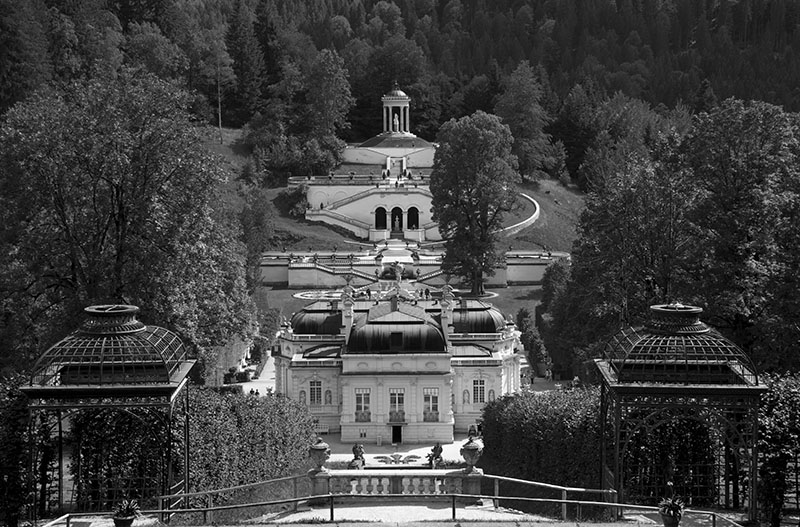 Pastureland covered in corn (hand – picking in one) and grains with the great pine forests extending down to their edge. Small green & white signs meant cycling/walking paths we discovered when Bob took a wrong turn by accident and wooden barns were prevalent. Not a great deal had changed in some ways of life.

Geese that counted the hundreds regally promenaded in the field of one farm, acting as guards we presumed.

The farther into the mountains we traversed, the greater grew the wood piles; a sign of the glacial conditions experienced each year.

Rivers and creeks, lakes crisscrossed the land. Passing through Schwabia into Bavaria, the country side was ever changing, although so miniscule it was hard to put a finger on it: colours, and silence probably the most, although small changes in house structure.

Passing through the town streets, the visitor noticed a massive pole structure of blue and white – the Bavarian colours. These are known as the Maypole. A tradition that had its conception in the 16th century, these were once only erected during the month of May, but are now left standing all year round and have become multi – purpose.

Once a decorated tree or tree trunk, it was erected on May 1st, or the evening prior in the village square. Upon it are emblems that represent the township’s crafts and industries.

Rich was the pastureland for the dairy cows. Early on in the day, it was possible to espy them feeding from the racks in the barns whilst being milked. Often the pungent smell of the animals pervaded the air.

Heading toward Schongau, the highest most Alps became visible, creeping ever closer as the day progressed.

Passing through Schongau Altstadt, we just had to stop to take a pic of these reindeer.

Right next door was the church, and I had to go in for a peak, of course: so worthwhile!

At Achen we entered the Alpenland.

Oberammergau hasn’t changed a great deal: a bit larger, but the Altstadt is still exquisite.

Appearing to remain close to their religious roots to this day, the Passion play continues to be re – enacted once a decade, and wall frescoes decorate the building walls.

This was an intricately designed work of art.

The silence at night is profound. Looking for an evening bite, we discovered a delightful Mexican café that was bopping.

It was during the early 1600s that the plague raged across Europe. This small township was experiencing massive losses. 1633 was the year that the townsfolk swore an oath to put on a play about the death and rebirth of Jesus if God halted the ravages of the plague for the village. The death rate immediately commenced decreasing and believing their prayer had been answered, it was in 1644 that the inauguration of the Passion Play took place in the cemetery.

There are two town laws relating specifically to the play: they dictate all who participate must have resided in Oberammergau for a minimum of two decades and hair must be allowed to grow from April of the year prior (Beard and Hair Edict). In today’s world, the number of participants exceed 2000.

Over the years, the production has been moved to years that end with a 0.

Having checked in, we made the decision to continue the short distance to Linderhof Castle, one of the three exquisitely beautiful palaces constructed by ‘Mad’ King Ludwig II of Bavaria: the best known is Neuschwanstein, the palace seen at the commencement of all Disney films.

Driving through a flat valley floor covered in a mix of grassland and woods (20 years ago there were no woods here. The Germans are doing a fantastic job at revegetation) we at last came to the turn off that led us on a short drive toward the mountain slopes. It is there, nestled in the shadow of the towering peaks, that the visitor finds Linderhof.

I first visited Linderhof in the late 1990s and was impressed with its richness: the grounds have certainly changed over the decades.

Once upon a time, the visiting vehicles drove up to park practically outside: today it’s a ten minute walk – not a bad thing as the scene is set as the visitors walking through woods that have been reintroduced; photographs were allowed to be taken (now the visitor can only purchase post cards or other paraphernalia), and there was no ‘cattle run’ in front of building: the tourism band wagon has arrived!!

On the other hand, the gardens and trees surrounding the palace have grown and been further developed,

and the inner sanctum of palace itself is still just as ornately decorated.

The grotto Ludwig had constructed beneath the hillside will be equally as beautiful, once the renovations currently in progress are completed.

It was still well worth a visit.

We had a delightful stay at Hotel Koppa.

Link to Images of Linderhof