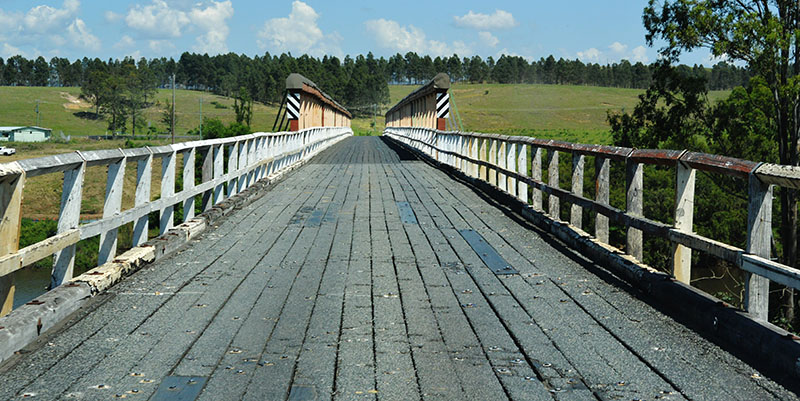 After a peaceful night, an early morning departure from Bonalbo soon found us turning onto the Bruxner Highway and heading west.

One of the pamphlets picked up last night had a tourist drive commencing a kilometre or so from there, and we had made the decision to partake in this scenic diversion.

Arriving at Clarence Way, a dirt road, upon which sat signs warning of rough surface, awaited us. A quick glance at each other and we arrived at the same conclusion. Most of the dirt roads travelled so far had been in better condition than the bitumen, so turn left we did. And immediately regretted doing so.

Within a few metres, the corrugations were shaking us left, right and centre, and with no room for undertaking a U – turn, there was no option but to continue. As with most situations, however, there was light at the end of the tunnel some ten kilometres or so down the road, where yet another road led us back out on the highway.

As we drove the scenery significantly altered as dry eucalypt forest replaced the cooling sub – tropical rainforests Bob and I had travelled through to date. Long steep hills and winding curves welcomed us to the northern region of New England, New South Wales. Here, the caravan brakes were put to good use!

If one wound the window down, it was possible to make out the sound of the elusive Bellbird’s piercing chime.

Rotting stumps told the story of the fate of the original forest that had stood, here for millennia. Cleared of undergrowth, younger eucalypts that now grew in a more open woodland setting had replaced the old.

An hour prior to lunch, we arrived in Tenterfield, a large country town with plenty of historical and some beautiful buildings.

It was here, that another turn took us southward onto the New England Highway.

Some time later, there was a break in the Scottish town names as we passed that of Bolivia. It was here that the steepest of inclines led us between granite encrusted hillsides where boulders of all shapes and sizes decorated the area.

A quick trip into one of the camping grounds: beautiful countryside, but no power, so out we headed once more.

Lunch was eaten in the small town of Deepwater, where if you buy their Hamburger with the works, you really are in ‘Deep Water’!

Although the distance travelled was only about 160km, because of the road conditions, we had been on the road around five hours and were ready to stop for the day.

Twenty kilometres west of Deepwater is Emmaville, a small community situated in sheep and cattle country.

In a park opposite the school, set between the town pool and a paddock in which cows graze, we set up camp for the night. Peace, quiet only interrupted by bird song, power, water and showers – steaming hot with good pressure: what more could we ask for