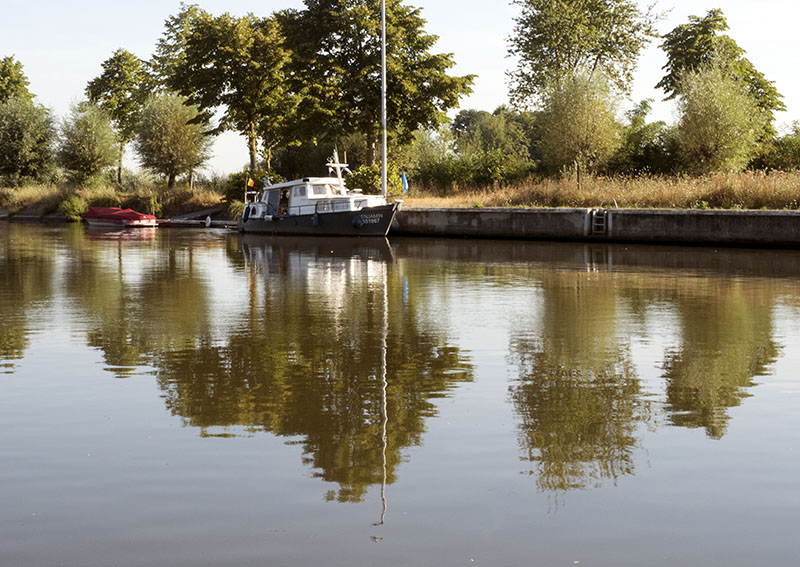 Awaking to a warm morning,

breakfast consumed, it was time for Bob to reconnect the seal and lid to the base of the water muffler.

Taking a matter of minutes to accomplish, all required now was to turn Big Bertha over.

Engine idling, no leaks evident, it was time to test by increasing throttle revs. Up, up, up they went. Reaching 1800, all went to blazes as alarms blared, Bob yelled, and Bertha coughed and spluttered to a grinding halt.

It was blindingly evident that we had no further avenues left. Here Bob and I would remain until a new seal arrived.

Computer booted, onto the net went Bob in search of the troublesome piece. Part found, it was time for a phone call. Being on the lock’s mooring and just outside the township of Bossuit, he had need to confirm delivery was possible. ‘No problems,’ was the response, and even better news was the fact that the package would arrive late that afternoon.

It is at this point that the Flanderen/Wallonian border criss – crosses the canalised River Scheldt.

Turning left into the Bossuit – Kortrijk Canal one leaves the busy waterway behind and enters relatively peaceful farming countryside – at this time of year farmers upon their tractors are under full swing reaping.

Prior to the opening of this canal that connects the Rivers Leie and Scheldt, the barge captains had need to undertake a 138km detour via Gent when transporting cargo between the ports of Ecaussinnes, Tornai and Soignies.

In 1857, a group took action and commenced the process of excavating a 15km long canal, with 11 locks, 18 bridges, lock keepers’ cottages and a pumping station. Dealing with a rise in excess of 16 metres, a tunnel 611 metres in length was dug into the hillside at the township of Moen – next to where the current Moen Lock now stands.

Twelve hundred people and forty horses worked for three years to complete this project, and on 7th February 1861 the new waterway was at last opened.

Sadly, the canal proved non – profitable, and after some years of running the operation at a loss, the company owning it was forced to pass it over to the Belgian State who undertook a series of upgrades.

On our ride around the townships here, the closed buildings up for sale told the story of businesses and factories that were still fated to fail and close despite the waterway’s upgrade.

On board once more, we eagerly awaited the arrival of the package which was only an hour away from delivery.

Packet in hand at last, it was a sight to behold as like an excited child Bob ripped the parcel open and raced below. In a matter of minutes, the muffler was in full working order and ready for testing.

At the helming station, I turned the key. All well. Up went the revs….

Down below, Bob experienced euphoria as not a weep was in sight.

On the morn, our journey would continue.