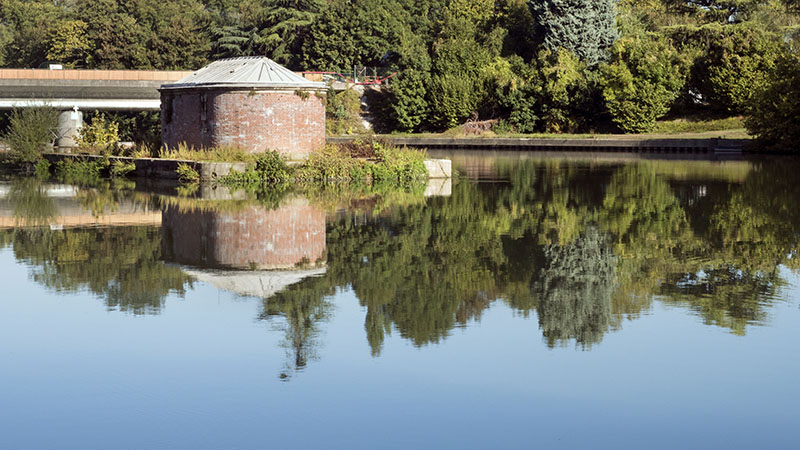 The highlight of the day was visiting the remains of Machine de Marly, another link to Chateau Versailles.

and details about the history of the machine.

Situated just down from the lock, approximately 12km from Paris by road, in its day, this was an engineering masterpiece and the brain child of Louis XIV.

The sole purpose of this machine was to pump water uphill from the Seine to Chateau Versailles. At that time period, the machine is believed to have had the greatest number of integrated working systems ever put together in a machine.

Taking seven years to complete, consisting of fourteen paddle wheels that powered two hundred and fifty pumps to push the water through pipes up a 152.4 metre incline, Machine de Marly commenced operation in the year 1684 and remained operating in this way until the year 1817 when a pump operated by steam was installed.

Further changes took place when an electric generator was installed in 1963. Although some sections of the machine remain, it was with disappointment that we discovered the building with its paddle wheels was demolished in the late 1960s to make way for a reworking of the river for improved navigation.

In addition to the structure situated on the waterway, there was that constructed along the 600m hillside to the Louveciennes Aqueduct.

Along this route were placed pumping stations, holding tanks, basins, pipes and more: all for the sole purpose of pumping the water uphill from the waterwheels below. When required, in a twenty four hour period, it was possible to pump in excess of 3785411.78 litres of water into the reservoirs.

Despite the steep incline, we made the decision to climb the path as far as possible. Despite the now grown trees, what a view out over Paris.

Our amble completed, it was time the time had come to return to Gratis for the retracing of our steps to Cergy.