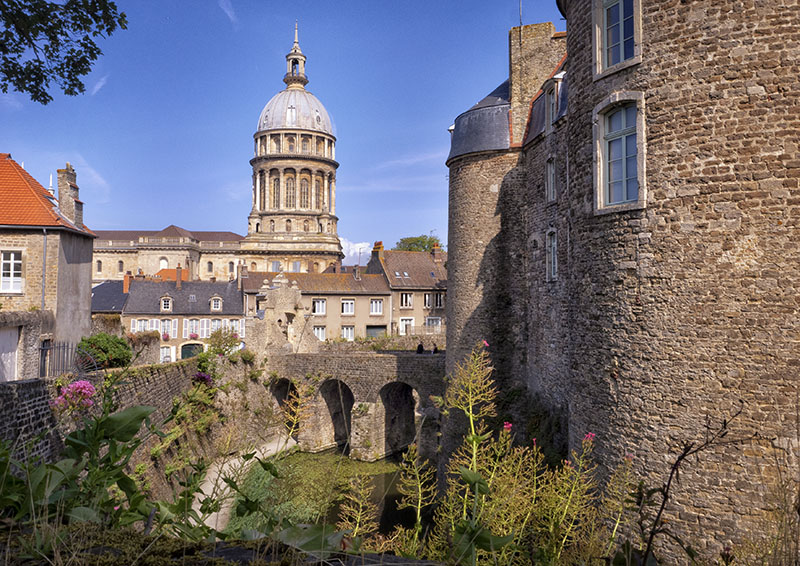 Walled City Upon a Hillside Peak

A fifty – minute rail trip took Bob and I south through hilly farming country to the township of Boulogne – Sur – Mer.

On alighting from the train, we discovered a short hill – in the scheme of things, that was. The slope leading practically straight up was another matter! It was thank goodness for the electrics!!!!.

There was a definite ‘Wow’ factor on arriving at this two thousand year old walled Medieval township perched high atop the mount.

The ramparts surrounding the topmost part of the town took 4 years to construct in the early to mid 1200s.

What a view they would have had before the modern buildings of today took precedence. It appeared almost as three towns: one fortified, a fishing village upon the shores, and a third positioned between.

Viewed from almost every section of town, the Notre Dame de Boulogne Basilica was based upon those of London’s St Paul’s, and St Louis des Invalides. It houses 147 types of marbles and metals.

Bob and I enjoyed cycling around Boulogne – Sur – Mer’s ramparts.

The remains of a Roman wall was utilised as the foundations of the current castle that was constructed during the 13th century. It is the first castle in history to have been built minus a keep.

and the moat still holds water.

What a magnificent sight it was.

Bob even managed to take a rare image of yours truly!

Some sections remain in ruins.

Set within the wall of the Citadel

is found this plaque. It is memory of the Canadian Glengarry Highlanders who were guided beneath the structure’s walls on 18th September, 1944. With the aid of artillery from without, the 200 strong German garrison were at last defeated.

The pdf (see below)I came across free online is worth a read for those who are interested in the Canadians’ WWII Participation.

Even after all these years of travelling Europe, there are still new door knocker designs to be found.

Outside of the medieval township, there are still steep hills to find. This sign was a beauty!

Walking down the incline it was soon easy to really understand its meaning.

What a view, though!

Down at sea level is the lower section of town were the fishing boat harbour, yacht marinas and Europe’s largest  aquarium are to be found. Bob and I enjoyed our cycle ride upon the low cliff ridge and river banks.

To complete the day of discovery, we came across this image depicting scene of a an early village woman’s life.