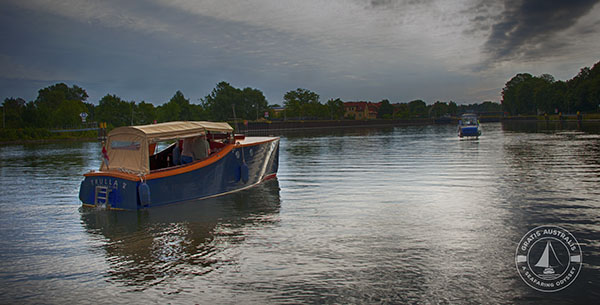 What a treasure the people of Berlin have in their lake district. We never realised the size of the water catchment bordering the landscape to the west of Berlin (in fact, the truth is, that until the planning of the trip was underway we didn’t realise there was one). The traveller has to experience travelling the water ways to truly understand.

One regularly runs into people met along the way. Remember the morning we listened to the lady playing her accordion upon the bow of her boat. Well, just after departing the marina, there she was playing away.

Past a church that is now only an empty shell,

and homes with their boats moored just out back.

A bit of drama took place as this barge approached rapdily from behind to pass.

Two lovely ladies, unaware of all going on around them, motored into the direct path of Gratis and chugged along in front of the bow.  Horn blown, once, twice, thrice and still totally oblivious…… On approached the barge. No room for manoeuvring, it was only possible for Bob to reduce engine power by a fraction, as the effect of  the wake caused by the barge as it passed could put us in danger ourselves. A final longggggggggggg blast on the hooter at last resulted in a reaction from the women. A look behind, then putter, putter, putter as at snail pace the tiny boat edged out of harm’ way.

Today’s passage upon the canal led us through narrow channels, across the Trebel See to the intersection where the waterway split into three major arteries. Taking that on our right, Gratis motored southward down through Gottin See into Potsdamer Havel. Each channel connected with lake after lake as Gratis traversed the waters toward Postdam: Grosser Zernsee, Schwielow, Templiner until at last the northern tip of Tiefer See was attained.

Occasionally, we would pass an interesting little water vessel.

Hidden nooks within tiny inlets and minuscule islands covered in shading trees, whilst water lilies and reeds encased their shorelines, led off the main channel which ranged in depth from 2.3m to 7.5m depending upon the section one was navigating. This was a waterway in which one could easily become confused and lost without the charts.

We delighted in the sight of these holiday campers paddling away.

The day waning toward sunset, we arrived in Potsdam. Boating marinas in an abundance you wouldn’t believe – the majority far too small for our girl – aligned the shores. Every so often, a base for the box house boats came into view. At this particular company, a new group of holiday makers appeared to be readying for their sojourns.

Sansouci, summer palace of the Prussian kings rose high above its surrounding gardens. What a delight to view it from the water!

On past the ferries that take the tourist on board for a small taste of the region, until at last, Nymphaea Marina called to us. A delightful spot, where, just across the way, resided a small country abode in what was once the playground of the nobles.