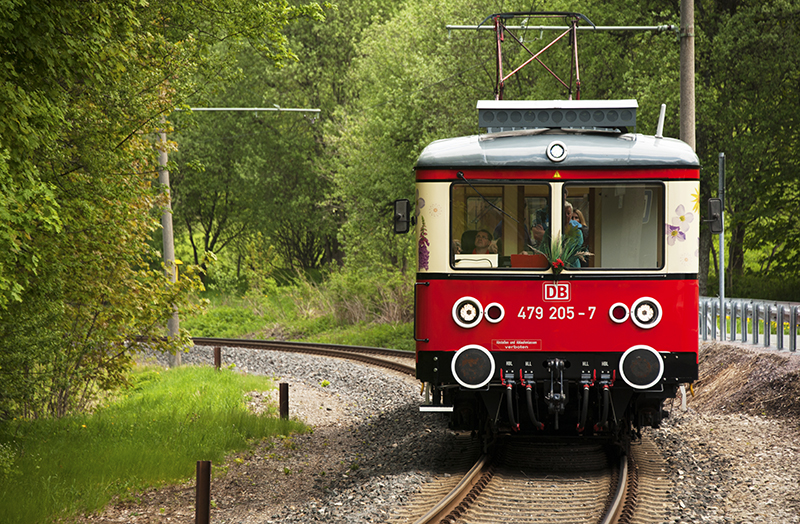 This was our last day true day of touring through yet more picturesque scenery. Oh, to experience a good long hike through this landscape!!!!!!!

Unique in the townships Bob and I journeyed through, were the multitude of buildings whose outer shells were wholly covered in slate tiles. Each overlapping the tile set above and nailed in place – the hole had been pre -drilled – this was yet another way to waterproof and help keep the cold at bay.

First stop, Neuhaus am Rennweg to view the rarity of a wooden church.

Not quite so, for the outer walls and roof were constructed of slate in varying colours and patterns,

with wood only used for the windows and doors.

From a photo placed on an information board, it was inside that wood came to prominence.

The highlight of this trip for us was the ride on the Schwarzatalbahn, the steepest cableway for conveyance of regular railway carriages.

First though, was the passage upon a wooden walking bridge: those beams were serious!

Situated just outside of Saalfeld, this cable car enabled the transport of passenger and goods to townships that were, until recent times, only attainable by a long hazardous walk.

The decision to construct this cable car in three stages  (Rottenbach – Konigsee, Koditzberg-Sitzendorf, Sitzendorf – Katzhutte) was made in April of 1895 by the Prussian railway administration. With a short length of just 29.33km, the route was officially opened in August of 1900. Prior to this, small towns such as Oberweissbach and Cursdorf who were situated on the plateau high above the valley floor were extremely difficult to reach – during the winter months in particular.

Some of the original gear was on display.

Signposts along the way showed the heights.

The Schwarzatalbahn was already in existence at this time, but it was decided to create a connection between the two lines. With height of 323m and a slope gradient of almost 1:4 to contend with, the cable car railway was installed and 1923 saw this final section of the rail link officially opened. Just over 2.5km length of adhesion track in conjunction with a 1.3km long cable car that included a cargo platform (1924 for transporting regular gauge rail carriage s, connect the two stations, Obstfeldermiede and Lichtenhain.

then back down and on to Saalfeldand its numerous gate towers still in existence.

Another beautiful township greeted our eyes.

As always, the church had something new to find.

With our journey by car at an end on the morrow, these past few days had presented us with a glimpse of this beautiful region.