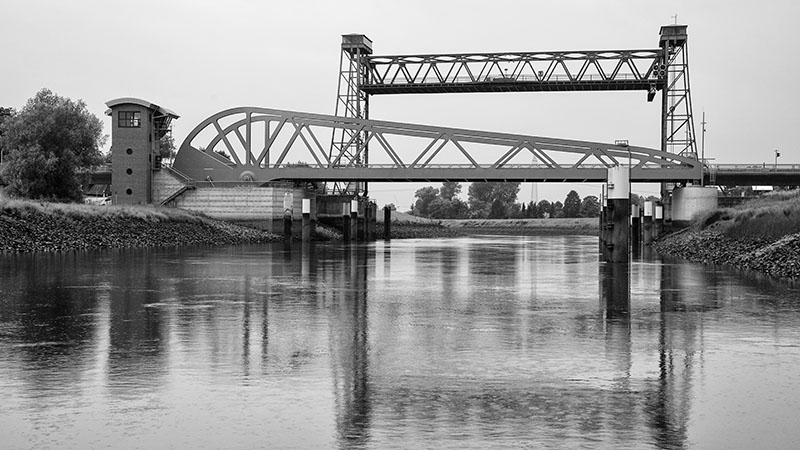 After a delightful stay at YC Hansestadt in Bremen, it was time to move on.

Tides checked: today it was crucial as we were to go from tidal river into another.

Making use of the outward going tide on the Weser, our aim was to then enter the Hünte – some 27 or so kilometres down river – an hour prior to the tidal changeover. This morning, that meant a 7:30am departure.

This was now mostly flat country, and we were informed the dikes have already been raised by four metres, thanks to global warming.

Compared to the Rhône, Garonne and Rhein rivers, the Weser was a gentle giant this morning: although, by all reads, that may have been a different matter at its mouth!

At one stage we passed a line of bright yellow life boats. Right on schedule, Gratis was turned to port and into the Hünte she motored. We discovered, one has need to keep a good eye when approaching the entrance, as it is difficult to sight when travelling from Bremen.

Behind us was a barge, so this time no radio call was required.

‘Beneath’ the first of the Klappbruckes.

Past a water mark.

Behind followed the barge.

Ahead, the countryside was flat and dikes protected from flooding.

Past a dinky little Dutch barge.

‘What was that you said?’

This section was only 24km in length and culminated at Oldenburg. 9km out from our destination for the day and look what we espied.

1km remaining, and the first of the low bridges appeared. There was a short wait whilst it opened.

Bob and I found it interesting that the bridge operators operate 24/7, yet the Oldenburg lock closes at midday on a Sunday.

On arrival at the township, the boater finds himself at a T – junction. If approaching from Bremen, a Yachthafen is to be seen directly ahead. Sadly, both Oldenburger YC – Stadthafen and Oldenburger WSV – Stadthafen become dry at low water. This meant they were no good for us. To our left was quite a high mooring, but here we would have felt like a monkey in a zoo. Our choice, therefore, was to take the entrance on our left. Also, the path to the Oldenburg Lock, this made good sense.

In sets of two, and situated either side of a ladder, are numerous poles that enable the bow and stern lines of the smaller boats to rise and fall with the tide.

Each set of poles were set far too close to be of full value to Gratis.

On the left wall, was a section situated at a suitable height and, in addition to the poles, there were small bollards. Choosing one set of the bollards, the bow and stern lines were each set around one, whilst a centre line was placed on the nearby pole. Happy with the setting, it was time to sit and relax – or so we thought. Not knowing these waters, it was still imperative that we keep watch, and over the coming two hours the tide steadily rose until, with a further hour so remaining, the water was only inches from the lip of the platform. Having released lines and adjusted the fenders numerous times, Bob and I were contemplating our next move, when it was rapidly made for us!

Our take on things, as the water commenced pouring out through the top of the banks and soon engulfed them? Global warming is here!!!!

It was time to move! Engine on, lines released, Gratis was edged forward until just under the bridge slightly ahead of us. Here there were more sliding poles, and a metal railing. Bow attached to a sliding pole, and the stern around a section of fence, plenty of slack was left to cater for both the last of the tidal rise, then the fall.

By the time Bob was happy, our previous mooring area was fully covered. From the time of our arrival, until the tide turned once more, the river had risen from 3.2m to 6.7m.

You may not believe it, but there are moorings like that in the image above all along that shore line.

We watched across the way as the water lowered.