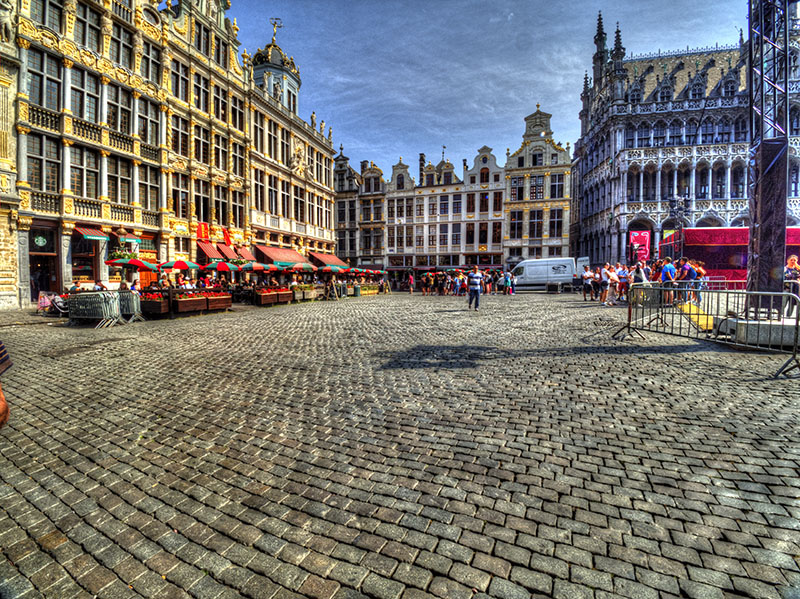 Having been advised it was far too dangerous to ride our bikes within the city centre , Bob and I chose to make use of the rail network: apparently, drivers have a bit of what we call road rage when it comes to cyclists and the pedal pushers find themselves knocked down and injured.

With the tram right outside the yacht club’s doorstep, it was only a hop, skip and a jump away, so with breakfast completed, across the road we went, and on we hopped. A few stations later, we found ourselves in the heart of Brussel’s centre.

The walk from the station to the main square led us along narrow cobbled streets aligned with chocolate shop after chocolate shop. To a chocoholic Australian, Belgian chocolate runs a close second to Cadbury’s. As you can imagine, my eyes were as large as saucers, whilst my nose twitched and taste buds salivated.

On first entering Grand Place, the sheer richness in its architecture draws the eye as it is presented with the ‘wow’ factor. During this week preparations for the yearly independence celebrations were underway, so it was impossible to create an image that did the area justice.

Grand Place and some 4,000 additional buildings that totalled a third of the city’s structures were totally destroyed by the troops of French Louis XIV during the mid 1690’s. It was the craftsmen of the numerous guilds that returned the city to its former glory and it is in the buildings enclosing Grand Place that their mark is still found today.

There was even a depiction of Romulus and Remus.

A second train ride took us slightly north of the main city centre to the Basilica. On walking out of the station, it was impossible to sight what appeared in the pictures to be a monstrous work of art. Other than the building lined streets, only a park with a wide avenue of trees was visible. It had to be that way: a quick consultation with Mr Google appeared to confirm our summations.

Ambling down the tree – lined avenue,

we were handed a welcomed reprieve from the oppressive humidity and burning heat of the sun: at times it doesn’t feel much different to the heat of our north. A good two kilometres later, by the time of when somebody we know was feeling quite knee sore, the pathway came to an abrupt halt and – beside the large roadway that now runs across ways in front – the impressive sight of the Basilica towered above us.

As buildings go, the Basilica is a young ‘un. To commemorate Belgium’s half century of independence in 1880, the king of the time released the idea of having a ‘Hill of Mercy’ on which a church was constructed. Leopold II was enthralled by French architecture and desired that the new structure emulated this.

The first stone was laid in 1905, but the Great War depleted Belgium’s finances, and with architectural tastes also moving on, the planned design was significantly altered to that of ‘art deco’. Finally completed in 1969, the church was dedicated to the fallen of the First World War.

Bob and I took the lifts up to the 52.8m high panoramic view. A little hazy, it was still worth the trip as we viewed the green rim circling the city.

Within the church is a room set aside in memory of the ‘Black Sisters’, a group of women who looked after victims infected with the plague. The oldest documentation on them is dated July 1360. This was a small room in which a few artefacts were housed. It was interesting to discover the items were donated to the church when the order departed to city to climes unknown.

The image depicted on these stained glass windows was that of the sisters providing care to a plague victim.

There was even an art exhibition: this was the piece that appealed to us most.