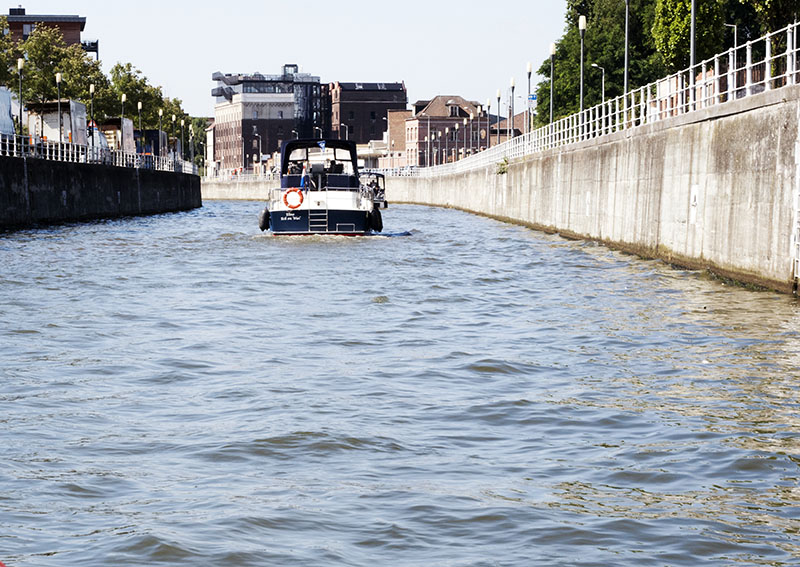 This was the day we waved goodbye to Brussels and commenced our journey along the Brussels – Charleroi Canal.

Unfortunately, it was a city that we just couldn’t connect with in the short time we were there. The waterway is filthy and dead fish float upon the canal’s surface, whilst the city itself had an overall feel of old and run down.

Overall, the overwhelming highlights for us were our mornings spent at Waterloo and the Music Museum.

Our first lock proved to be a nightmare. Full of boats ahead of us, there was no chance of tying the centre line to one of the ladders and the stern to a bollard. The situation was much like we experienced the day we departed Antwerp, only more and working on the fly just didn’t go well this time.

Connecting with the bow line was the go. However, with the bow too great a distance from the lock’s wall, hooking a spare line onto one of our poles then lifting it up and out to loop the rope over the next bollard that lay way above was the only way of keeping the bow tied.

Waters rising to the level required for undertaking this task, whilst I attempted – with great difficulties – to do so, the line keeping Gratis in place came adrift as she floated up and past the holding bollard. As my excitement was taking place, it also came time for the stern line to be moved up. It was at this stage that our girl was totally free and for a short time she was at the mercy of the currents created within the lock as Bob worked the engine to reposition her.

I had no hope of success, but with a fair amount of jockeying, Bob was able to reconnect his line. With one line now holding Big G in place, it was possible for him to direct the bow back to the wall. As Murphy’s Law would have it, that took place just as the deck came level with the platform. With rope in hand, off I hopped to loop it around one of the large bollards that were placed some distance back from the lock’s edge.

Thankfully, the following four locks contained ladders, bollards and sliding poles, so there was a much greater choice for connection points. With a slight rearrangement of the boats, it was possible for us to connect the centre line to a sliding pole and the stern to the bollards: so much simpler all round!

Through the narrow waterway channel of Brussels we motored,

until at last arriving at the more open countryside.

Arriving at the Lot lock at the commencement of the luncheon hour, the cavalcade came to a grinding halt and were informed that a working barge had collided with – and significantly damaged – the Ronquieres incline lock some distance away. With a major leak in the system, water was pouring out and canal levels were rapidly lowering to below normal. It was possible to make it through to Halle, but the lock keeper was conserving water and awaiting the arrival of a barge from upstream: only then could the group continue through to Halle. Time for a bite all decided.

An hour or so later, the awaited vessel emerged from the lock and in motored the eight vessels. An uneventful rise, and into the canal once more went we. Another lock, a further bend, and there was Halle.

This was a simple town mooring on which power was available. Not long enough to cater for all the cruisers, the first boats to arrive achieved prime positions. Although not perfect, with a bit of a climb required, a few found themselves a spot just in front of the mooring sites. Meanwhile, Bob guided Gratis next to one of the barge moorings that were placed slightly ahead of us. Although not really long enough for her, with the mooring lines correctly placed, this was still a suitable site and it was possible to unload the bikes. The only downside was the power cord not being of a length to reach the outlet, but even that issue has now be solvered.

That aside, it was relatively peaceful and free of pollution on all quarters. We were happy!

This is to be our spot for the next four or five days whilst the repairs are made at Ronquieres.

Closing hour soon to be upon us, the bikes were unloaded and the two of us cycled the short distance in to the town centre and the tourism office. A couple of friendly assistants found all the information that was available in English – they don’t see many of we English speakers – and some in Dutch. It was enough to get us started, and the internet would help fill in the spaces.