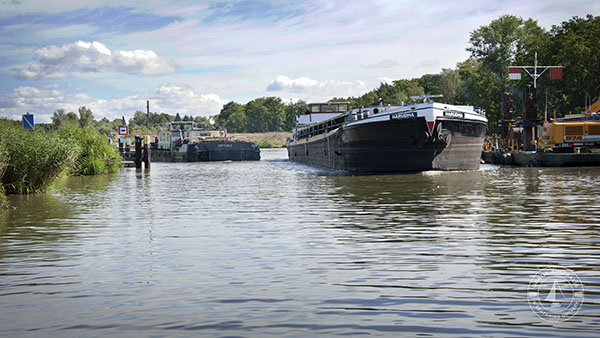 Vibrant colours, warm sunshine, practically clear sky: what more could we ask for?

Thick fog created a dreamscape as it encased the surface of the canal. Sun risen and fog dissipated, off we set for what would be our final day upon the Elbe – Havel Canal.

Farming country interspersed between thickly wooded forests passed us by, with minimal barge and sport boat traffic making for a most pleasant sojourn.

Through two locks. At just over five and two metres respectively, these were babies in comparison to those travelled through over the past months.

As in other sections of the canal, the area prior to, on and after Zeberten Lock was undergoing a major works with more widening of the canal in addition to a second lock and moorings being installed, whilst In and around that at Wusterwitz had been through its major works. What will eventually be a new lock appeared to be undergoing its final stage of the process prior to completion.

Approaching Zerbeten was an experience. One way traffic wove its way between waiting loading barges

and massive diggers sitting upon flat barge beds. Now, that was a sight to see, as the mud encased shovel emerged from below with water gushing between any crack available.

After a short wait at Wusterwitz,

through we motored: it’s just possible to see the newest lock undergoing construction.

Mid – afternoon, the scenery dramatically altered as Gratis entered the ‘expanse ‘of the Grosser Wendsee, the first of the lakes to be traversed in the final kilometres. Distances were small here, as we wove our way through the red and green lateral marks that highlighted the channel into first the the Plauer See, then the narrow winding channel of the Brandenburger Niederhavel.

Even here. the major channel has one encountering the large barges, whilst small craft crisscrossed the highway in their droves.

Tiny wooden huts set upon a flat base were the go for many a holiday maker, whilst others were happy to make use of any whiff of breeze for ‘sailing’.

Entering the narrow canal of Brandenburger Niederhavel, one left a world of blues

to enter a new world encased in greens against which everyday colours appeared blindingly vibrant.

Small pleasure boats of all shapes and sizes were in abundance here.

Mooring found not far from the Altstadt Bob and I disembarked for our evening meander. With only an occasional tram clattering along the cobbled pathway, the quiet only broken by the murmur of voices it was a beautiful town where much work is being undertaken in renovating the aged buildings.

This evening, the delight was hearing the deep voices of a couple of canoeists singing themselves along. Sunset, divine!