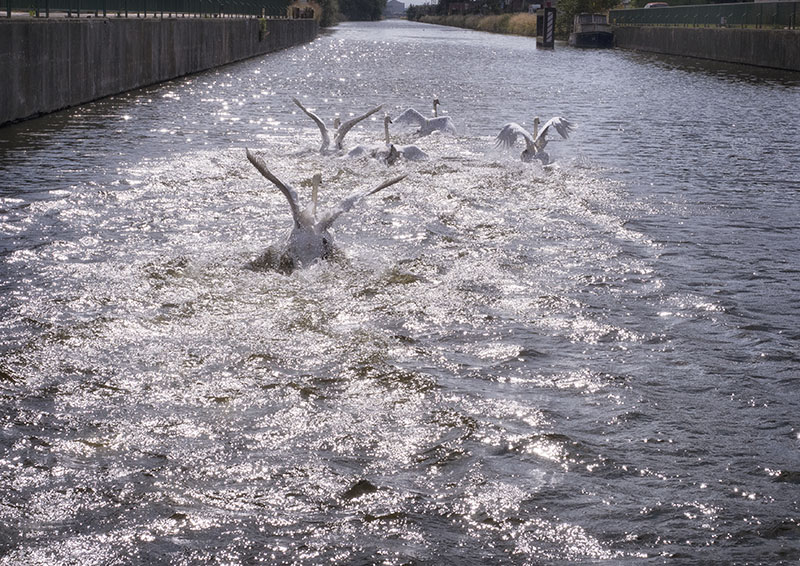 Being a sea port with tides of up to seven metres, one always has to work in with nature: the tides wait for no – one!

The Calais marina only opens to allow boats in at high tide which takes place twice in 24 hours and because of where we were in the cycle and how the locks allowing passage inland operated, that meant we had two choices: either a 5:30am or 5:30pm departure. Leaving at the latter would have resulted in waiting a further day to once more traverse the Calais Canal, so as you may have guessed, Bob and I chose the former possibility: the early rise scenario.

Up with the birds, time for a coffee prior to the 5:20am cast off. Half past five came and went, then a further five minutes, ten and fifteen…. At that, thinking they may have forgotten, Bob radioed the port authorities once more.

No, it was only the result of heavy commercial traffic.

6am, the bridge finally opened, and Gratis was on her way across to the first of the locks, where a short fifteen minute wait ensued. Within the next hour, Gratis had passed through the locks – with yours truly at the helm – and was once again moored alongside the old wharf within the inner basin. There was just enough time for another cup of coffee and breakfast: perfect!

With the VNF site stipulating the Calais Canal operating hours commenced at half past eight, Bob cast off the lines just prior and Gratis’ bow was pointed into the canal whereupon, on arrival at the first of the lifting bridges, Bob placed the call. No response. Quarter of an hour later, there was still no answer on the radio, so with Gratis once again tied off, for a short walk to the operator’s hut went Bob.

As you may know, Bob can become quite frustrated when things don’t go to plan, and it happened that good old Murphy was at it again! So, when Bob returned to Gratis with the news that 9am was now the official start time, there were little white puffs of steam pouring forth from his ears.

In fact, the sign on the door stated that since it was now summer season, operating times were 9am – 7pm, the office opened Monday, Wednesday and Fridays and was closed on Tuesdays and Thursdays. We’re not sure about Saturdays and Sundays.

Over the next quarter of an hour we watched Calais awaking, whilst keeping an eye out for the bridge operators. Well, that stipulated time came and went………….

Finally, at nine fifteen, there was movement at the station! On radioing in, the operator informed Bob we had need to wait and fall in behind the tourist boat.

At last the boat rounded the corner, the bridge was raised and at 9:30am Gratis was on her way once more. For a while, that was!
Half an hour later, just in front of the Cologne bridge, the tourism barge spun round in order to undertake its return trip to the city, and with it went the operator. Once more tying Gratis, Bob and I sat down to wait our turn.

You could have hit us down with a barge pole, when on twenty minutes later the alarm for the lowering of the boom gates to halt the passage of traffic rang out. Up popped Bob, and there in front of us was the lass who had let us through a week prior. It appeared she would be our chauffeur along the Calais once more.

A bevy of young swans kept us well entertained early on in the journey.

With Gratis edging up behind – with the bridge opening there was no choice but for us to continue forth – they didn’t seem that sure of flying.

The morning wore pleasantly on, and by our 12:30pm arrival at Pont Hennuin, which happened to be during the VNF lunch break, Bob had unwound enough to state that it was rather pleasant just sitting and listening to the sounds of the countryside as roosters crowed, tractor motors thrummed and ducks quacked, whilst we awaited the arrival of the lass.

Quarter to two and Gratis was underway once again. They were more swans who kept us entertained with their antics.

The last of the Canal Calais locks traversed, at 2pm our girl finally turned on to the River L‘Aa. In total, it had taken us eight and a half hours to cover 29.5km.

Was it worth it? For a once only, yes. The countryside was picturesque, in Calais it was possible to catch glimpses of the impressive structures she once boasted, whilst the townships of Gravelines and Bourlogne – sur – Mer were a must see and our trip to Dover was another bonus.

One thing we would recommend prior to your stay, would be checking to see whether there are any carnivals set up on the dock opposite the marina at the time you want to visit. We had seven days of midday to almost midnight of carnival rides thumping out music with constant booming and it wasn’t pleasant.

Continuing eastward a few kilometres more, the River L‘Aa merged into the Canal Neufosse and soon the Flandres Lock was ahead.

As with last year, this almost four metre lock set up was no fun for the pleasure boater when it came to rising. With a barge joining us in this structure where there were no bollards on which to tie above the two metre line, a challenge ensued since all we could do was hook up the ladder – which happened to be right along side the barge that was also unable to tie and ran its prop all the while. That aside, Gratis at last exited and continued for another couple of kilometres.

By this time, it was close to 5pm and we had been on the go for twelve hours. Exhausted, Bob directed Gratis into a mooring just past the original Fontinettes lock (how exciting! Since motoring past last year, restoration work on the structure has commenced) and before the entrance to its newer almost 14m high replacement.

For the first night in a week, Bob and I fell asleep to the sound of silence. Heavenly Bliss!!!!