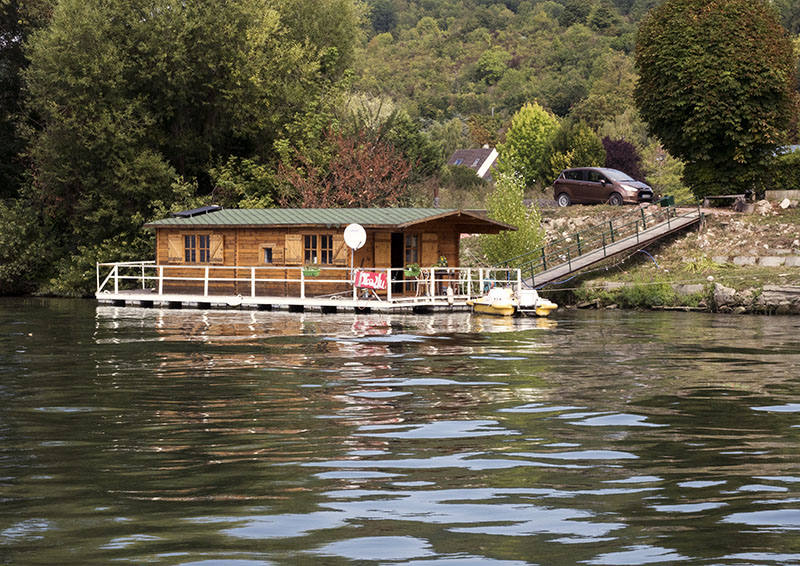 Completing the motor upon the beautiful Oise, Gratis passed the row of boat yards and barges,

then turned right onto the Seine. You’re probably saying about now, ‘Hang on, you are meant to be heading toward Paris, not away.’

Yes we will be, but with a few days up our sleeve, we made the decision to visit Monet’s Garden at Giverny.

A wide river: having envisaged flat countryside within which a meandering Seine roamed, we discovered this was not the case.

Over the centuries a valley had been cut by the ravages of water, wind and time. Rolling hills flanked the valley through which the Seine runs.

and forest. A wide river interspersed with islands on which communities had settled.

At Poissy, the remains of the Vieux Pont de Poissy were all that remained of a bridge that had been repaired time and again over the centuries.

The 26th of May, 1944 was the day that its final destruction took place as bombs hurtled down to blast this structure that once house no less than 37 arches and four mills. The 17th century had seen it fortified  with lifting spans at either end to ensure that no – one crossed without paying the tolls.required toll – what an impressive structure this must have been.

Initially it was intended that we spend the night at Meulan en Yvelines.

The Petit Pont with its narrow archways meant the cruising boat had needs to enter via the long route.

Found in the back water and protected from the wake of the barge traffic, the setting was idyllic. However, the vibe of the area sadly was not. The power facility had been vandalised, and the park in which the pontoon was set was inhabited by the inebriated and so forth.

A short walk into the township didn’t allay our concerns, so as much as we would have liked to stay, with the high possibility of waking to discover items on board missing, we chose to play it safe and move on to Limay.

At Limay, the Seine is split in half by two long islands. Entrance to Limay and its marina – Les Marines de Limay – took place by heading to the right of Ile de Limay.

Once seen with a total of eleven arches, the Old Limay Bridge (Le Vieux Pont) dates to the 11th century,

but was destroyed in 1940 by French troops in the attempt to slow progress of German troops.

To this day, it stands in two halves, a stark reminder of the ravages of war: it was between the two halves that Gratis motored.

Although there is no sign of its existence today, a windmill once stood upon the structure, but it is still possible to view the two story gatehouse (constructed 1700s) in which the toll collector who controlled access lived: a good news story here, for it is still inhabited.