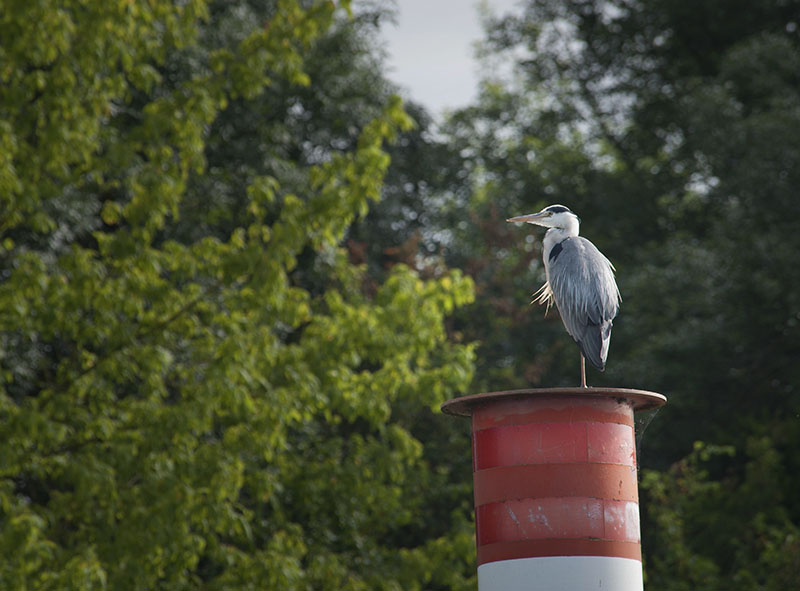 Except for passing through three locks, it was a 90km non – stop day. The time was spent enjoying the passing countryside.

The river becomes ever slower. Today the water was like a millpond, with the flow only showing slightly on the bends.

Water lilies in huge masses decorated the water’s edge, and here the cruiser espied herons and cranes prowling, and swans dining on the greases.

At the commencement of La Petite Saone, bumper boats commenced appearing. We were in the waters of the holiday captains once more!

The last of the three locks was unmanned and the sequence was activated by a pole just metres from the lock itself. These we discovered only have the bollards affixed upon top of the lock wall. From our reading, Bob and I had a feeling we had seen the last of the lifting or fixed bollards set within the walls and had prepared.

Auxonne, our mooring for the night. Just past Pont de France (the bridge) were a series of moorings situated upon the right bank. In Bob nudged our girl. No proper cleats here we discovered. Instead, they were rounded, with no shoe horn type overhang on the end, which made looping the rope through the centre the only option, and attached to a track with adjustable bolts that enabled them to be moved.

A really bad design this, for three reasons: the first being it is not always possible to alight from the boat in order to loop the line through the ‘cleat’; the second that it’s impossible to easily make fast the rope on the contraption, meaning it must be tied off on board the boat; and thirdly, the bolts are not always tight.

What did this mean for us on this particular evening?

I had to alight to place the line through the cleat; there was no place for tying off the rope and the current had taken Gratis backward, which meant I was unable to climb back on board and tie off the line. It made to sense for Bob to continue the reversing process and connect the stern line. With no overhang for making fast, I had to loop the line through the cleat in order to gain traction – yet leave it loose enough for allowing Gratis to continue her reverse movement. It was here that the third of the negative points came into play. Gratis back far enough, it was time to keep the bow line tightly locked in order for the stern to be directed back into the bank.

Ha!!!! Unexpectedly, the cleat also went on a backward journey, stopping just short of coming off at the track’s end, and I was left carrying the weight of an 18-tonne boat in the seconds prior to Bob placing our girl in neutral. Thankfully, he was in such a position he could secure the stern, thereby allowing me to change over cleats.

Moored at last, there was time for a wander of this Military town ship: Napoleon Bonaparte attended the officer’s training school here in the 1700’s. An interesting town, with a mix of renovated and derelict.

In still waters, frogs with the strangest of cries that carried across the still air lulled us into sleep.