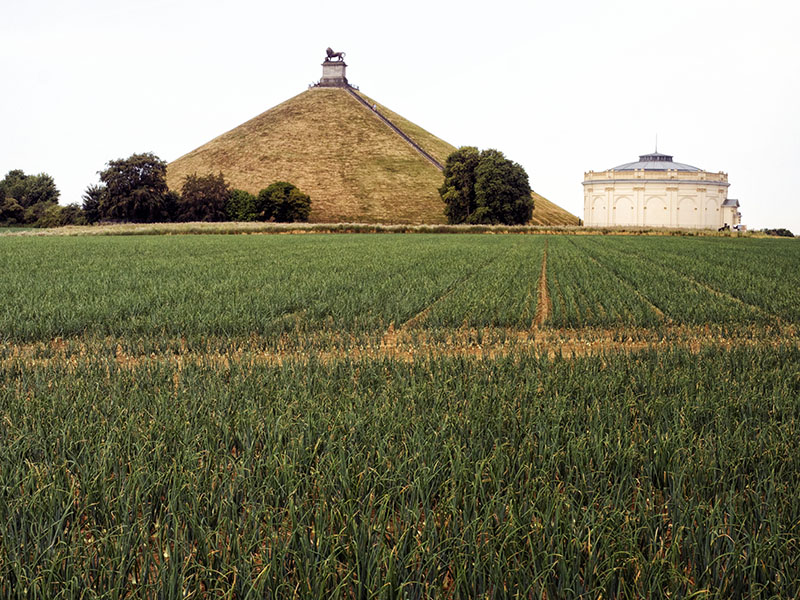 and a 5km bike ride transported Bob and to the battlefield where Napoleon’s final downfall took place.

Rising above the flat farming lands below, the memorial mound constructed in commemoration of the wound the Belgian monarch took during the midst of battle, is the first object that draws the visitor’s eye.

back then it was not so.

It was the age of Enlightenment and desire for releasing the chains of rule held by the old regimes – in part fuelled by the French Revolution – was well under way, meaning that Europe was in the midst of confusion and turmoil.

Despite abdicating and retreating to the isle of Elba after his failed campaign in Russia during 1814, Napoleon re – emerged at the helm of the French to continue his campaign to rule Europe. Many people today don’t realise that this was one of the early occurrences prior to WWI where multiple nations joined to create the Allied Coalition.

This was a time when Napoleon’s dominion and French influence was still at its pinnacle throughout Europe: a time at which the events at the Battle of Waterloo had far reaching effects. With the combined support of Spain, Italy and the Netherlands, it was here during 1815 that the armies of Great Britain, Prussia, Russia, Austria merged to defeat Napoleon.

In the museum below, the visitor was drawn into a wealth of history that came alive via the mediums of images,

These frames were small screens with scenes that moved.

A table set for dinner.

One of the highlights was the full 360 display that truly brought to life the ferocity and slaughter that took place that fateful day.

Should one so wish, it was possible to climb the memorial mound for the magnificent view.