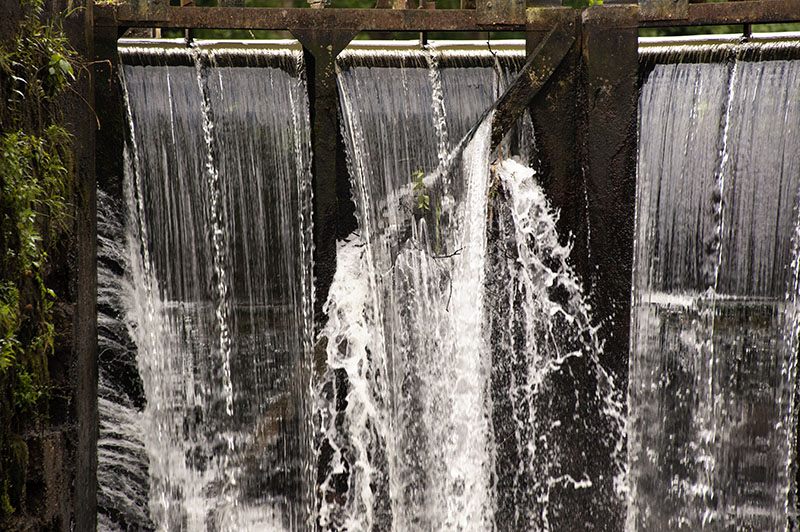 Heavy drenching rain overnight, brought with it a chill that pervaded the air. Out came the trackies, woollens and wet weather coats as we made our way to Richardmenil.

9am, engine on, lines being brought on board, the first lock commenced the opening process. Upon the canal, it is etiquette to allow those who arrive first the night before to be first in line the following morning. The people before us not arisen, Bob was setting Gratis in motion to be first in, when from the opposite bank the last arrivals of the night prior erupted form their mooring site with a burst of speed.

Ahead of Gratis they sped, coming to rest midway in. As Gratis edged in, these boaties refused to move, instead preferring to send us dirty looks. No bollard available to safely moor upon at the bow, a wooden post had to suffice, whilst the inconsiderates not having secured with lines, bobbed up and down within. Back on board to and securing the line, I glanced up to find the other helmsman directing me to disembark and lift the pole to set all in motion.

Who should come along just then, but a VNF worker. Espying the offenders not secured, a lively five minute discussion between he and they took place. It was with major reluctance that a mooring line was connected. Of course, we received a rap over the knuckles as well, but what can you do when there is no bollard made available. Another go to between the offenders and the VNF and forward they moved, thereby enabling me to correctly secure the bowline.

All clear to lift the pole, the lock thereby emptied and down we all went. Those ahead of us a flung off the line and gave a blast of the engine to head through the passage way before the gate had fully opened. On to the phone went the VNF official. As if realising they were still under observation, the culprits rapidly reduced engine to mosey along. Less than a kilometre down the canal, to our relief, the boat pulled alongside of a caravan park to moor.

In the meantime, the side road was full of VNF vehicles, more than we had seen during the entire trip to date: looking for the lawbreakers, or just checking the locks after the night’s rain???
In all, this incident is a rarity that adds to the experience.

Today we travelled through the greenest of country sides, a mix of pastureland and bush.

In the lock of Moulin de Charmes we delighted in the scene a tiny dog locked in for the day created as it gleaned enjoyment watching as passing boats raised or lowered.

Exiting one lock, we passed this overflow that assisted in taking care of excess water in times of flood.

At PK 50 and Chaurupt, Lock 37, upon entry to the lock Gratis lifted over a structure hidden beneath the water. Poor girl! Sent to the right, the starboard bow fender connected with the wall, which in turn gently bounced her to port. As this action took only a millisecond in which to occur, the stern was still over the culprit and the boat on a slight lean which lifted the port side rubbing strake above the height of the lock wall (we were going down, not up, by now). Sausage fenders turned and lifted in the process, there was no protection for the wood which hit connected with the lip of the wall on its downward journey. In the process, two of the rubbing strake bolts were sheared off.

The excitement wasn’t over yet, as just metres out of the lock a cross flow was created by the Moselle as it raced across. Thankfully, this anomaly had been sighted in time and Gratis had been positioned for the expected push to port that took place. As always, these issues had not been highlighted in the French texts (there was a possibility it resulted debris dropped in the recent floods).

In numerous locks, thereafter, the outflows raced rapidly and created whirlpool effects beneath the water. One had to be constantly aware, as dependent upon her position the movement of Gratis could be affected to quite a degree.

Every so often, waterlilies decorated the water in a mass of greens and whites. As we lowered in altitude, the forested areas became increasingly fewer as meadowland took its place. Trees were now decorated in ivy a stark contrast to the moss and lichen of before.

At times, the roadway followed the snaking path of the canal.

A healthy waterway, this, with damselflies flitterering in and around Gratis.

People made good use of the breaks in the rain.

One of the day’s highlights was crossing the Mosel, for now a dwarf in relation to her final size.

Only one boat allowed at a time.