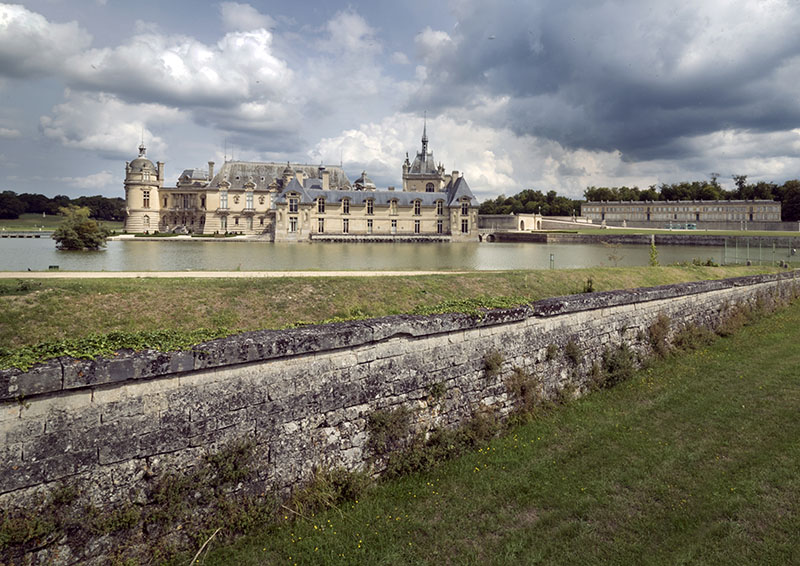 With mostly no bike lanes and many busy roads, what an interesting bike ride it was to Chantilly.

Encircled by water on one side, and high wall on the other, the Chantilly Chateau landscape was most picturesque (quite expensive to enter, Bob and I made the decision to enjoy from the outside, as Versaille near Paris was the goal this year).

The military compound was just up the hill.

Commencing life as a fortified construction set upon rocks in the valley of the Nonette river, this was the perfect position for control of the Paris to Senlis road. Destroyed in the mid fourteenth century, new owners had a practically impregnable fortress constructed in the original’s place.

Moving on to the Renaissance period, the then lord who venerated the styles of the French and Italian Renaissance determined a summer residence would be constructed and later – during the 1600s – the picturesque gardens were created.

During the early 1700s, a building in the classical style was designed and built upon the foundations of the original fortified structure. The architect of the time was also requested to design the stables and township of the same name.

As oft took place during the French revolution, the ‘Grand Chateau demolished. Unlike many, the chateau was reconstructed and given a new lease of life in 1875: the purpose? To house the Duke of Aumale’s collections. On his death, the grounds at his behest, the grounds were passed into the hands of the Institut de France.

With afternoon upon us, the decision was made to undertake the return journey via a new route.

Simple, one would think!

But no! Googlemaps wasn’t having a go of it this time.

Initially taken via picturesques townships with narrow streets hemmed in by walls,

Bob and I eventually found ourselves on a road that suddenly exited onto a major freeway. Stopping in an attempt to figure out what had happened, Googlemaps just wasn’t playing ball: nothing made sense! There was nothing for it but to continue in the hope an exit would soon appear.

Twenty minutes or so later, we entered the picturesque township of Senlis.

Another attempt to figure out Googlemaps, to no avail, left nothing for it but for us to return to Chantilly via the route whence we had just travelled, then onto Creil via that of the morning.

On returning to the boat and booting up the laptap, bringing up the maps, it was possible to view how wrong Google had been. NO WONDER things hadn’t made sense: we had been sent eastward – and away from Creil – to Senlis via the D924. From this township there were no minor roads available for transit.