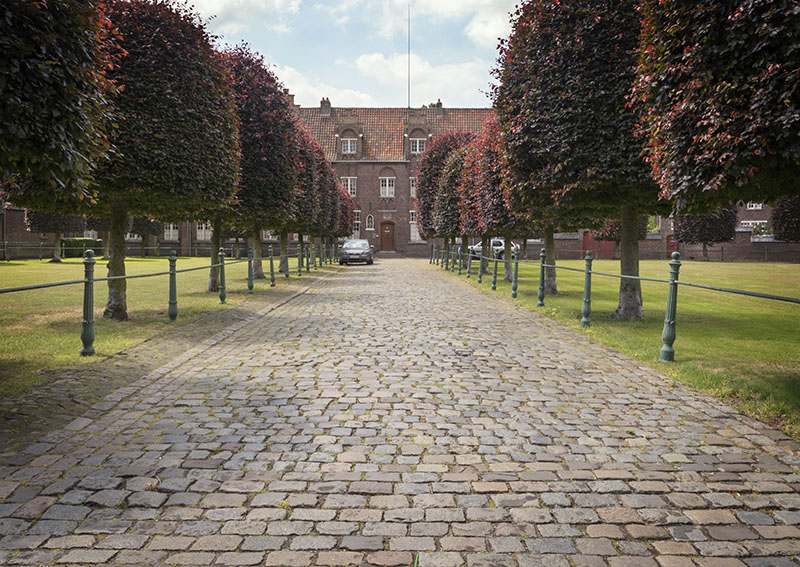 One of the oldest parishes in the town of Ghent, St Jacob was named after St James the greater, the patron saint of pilgrims. People still depart from here on their pilgrimage to Santiago de Compostela in Spain.

We found the image of the woman being led to her hanging an interesting one in the church.

The beguine was an interesting concept for its day and provided the single women and widows with a greater freedom than found in the ‘real’ world at the time. The name deriving from their patron Saint, St Begga, a ‘Beguine’ was a single Catholic woman, and when multiple of these women – often war widows – came together to form a community, it was known as a Beguinage. Other than having to partake in the vow of chastity, these women were not required to become nuns.

UNESCO world heritage listed, the Great St Elizabeth Beguinage was constructed during the early 1870s, quite late in the peace. Hidden behind high walls, on passing beneath the arched gated entrance, one enters another world: one of peace, tranquillity and sanctuary, a far outcry to the fast pace of life outside. Were it not for the odd car and bicycle, it would be easy to imagine you had been carried back in time. Used to the noise of our modern life, the quiet made one think of a ghost town.

This beguinage is also unique in that it only took eighteen builders and their 600 labourers two years to complete eighty houses, fourteen convents, one communal house, a sanitorium walls, a chapel and church.

The way home took us via the Gentbrugse Meersen, one of four large nature parks being developed around Ghent.

Bordering the Scheldt tidal river, Gentbrugse Meersen covers approximately 240 hectares, and besides walking and cycling paths, there are also playgrounds for the children.

A tradition set in recent years is the ‘Birth Forest’. Each year, on a day in October, the parents of each babe born during the past 12 months are invited to plant a tree for their child. There are also a series of poles on which a plaque with each child’s name and birth date are placed. What a lovely idea for growing a reforesting a new nature park!

Last item on the list for the day were the ruins of St Baaf’s Abbey (St Bavo), situated just across the way from Portus Ganda. From the road, one has no idea this still exists and my initial readings gave me the understanding that all of the abbey, church and surrounding township (St Baafsdorp) had been destroyed on the orders of the emperor in the mid – 1500s, with a Spanish style fortification erected in its place.

That was not fully the case. The village wasn’t totally annihilated, and on walking between the rows of bushes that now outline the shape of the long gone Romanesque church, one stumbles upon a door leading into the ruins of the old abbey and church.

There was quite a lot to still see.

A little bit of humour?

At 41mx10.5m, the dining hall of St Bavo’s Abbey was one of the largest of its architectural style in Belgium.

Some artwork was still evident on the walls.

In an aside, the fortification was in use until the late 1700s when, on becoming redundant, it was demolished, and the land used for anything from an abattoir to the current housing estates. Whereas other buildings of historical significance have undergone renovation, it is easy to note that evidence of this particular sequence of events which signified the massive loss of face and freedom, has been wiped from existence.