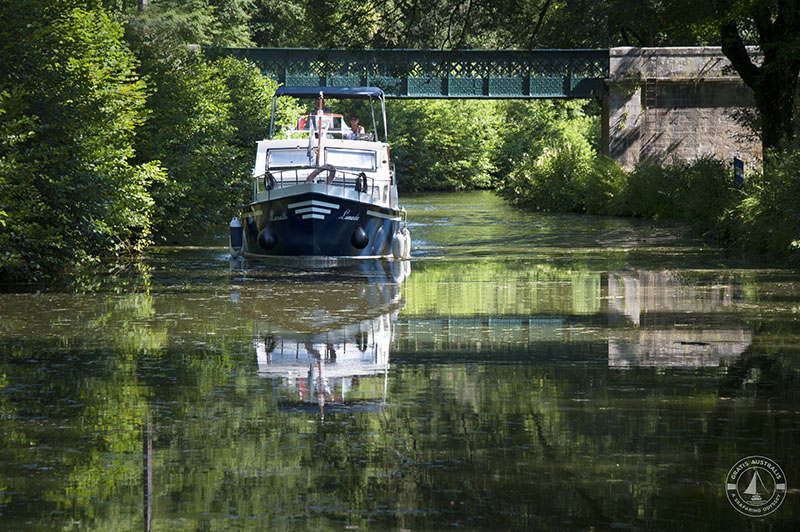 At pk 147.4, Gratis entered the first of 93 narrow locks, less three because Gratis would be entering L’embranchement de Nancy prior to the canal’s conclusion.

Operated by lock keeper, here we were handed the automatic wireless device that would open the gate of most locks along the canal and provided with a good – sized sheet of paper that explained how to operate the gadget.

Out of the lock Gratis motored into the canal and past the small township of Corre: on our right, what appeared to be fields of corn and to the left various factories – from the look of them we assumed wood chipping and brick making.

The owners of this tiny farmhouse, still made good use of the structures utilised in times past.

On the right – hand side of the bank, approximately 20 metres from the lock, was a sign upon which were written three words -Here, Hier, Ici – with a small yellow light attached to the pole. On approaching the lock, the device was held out, and when 10 metres or closer from the sign, one pushed a tiny red button that was situated on its top right corner. With this action, the yellow light attached upon the sign post commenced flashing, the lock light altered from red to red/green as the gate opened, to green once it was safe for us to enter. How easy was that!!

In, pole used to lift the lines up and over the bollards (or ladder climbed by Bob in the afternoon), Gratis made tight alongside the mechanism for setting the lowering/raising of water level into motion.

– one red for emergency stops, the other blue (for activation) – the blue rod was raised, held for three seconds then allowed to drop back into position.

The filling of the lock commenced: this mechanisation was found in both the Saone and this canal. An ear -piercing beep and the gate commenced closing.

Then it was just a matter of waiting and adjusting the lines as required whilst the water entered the lock. Standing at the bow of the boat, at approximately each one metre intervals, it was possible to hear a clunk as the next section of gate opened to allow more water in. With each opening, there was a strong burst in water power as a new influx entered, but this rapidly petered out.

A flash of the yellow light set upon the gate in front of us, the gates opened, lines released, and out we three headed.

Much narrower than the rivers, plant and bird life disappeared from the water’s edge.

Lock three log prevented the gates from fully opening, therefore the red light was still on so Gratis was brought to to a grinding halt as we arrived at the point of entry. A sigh of relief, as a head popped up and a VNF worker waved us on through.

Early on, we encountered a swing bridge. Toot the horn, and the gate wardens will exit their abodes to open the gate for the river traveller. No electric mechanism to carry out the work here. A solidly built woman emerged, jumped down behind the structure and gave it a mighty heave ho. So well balanced, that one push was all that required to set the bridge in motion upon its wheels.

Just out of Selles, from a nearby factory, the aroma of cheese wafted upon the gentle breeze. Mmmmmm!

As the day passed and the climbing of the mountainside continued, the distance between the air molecules increased sound appeared to become much denser as its distance travelled decreased.

Along the way, well set out picnic areas, with tables, benches and mooring pontoons had been installed. Like the hikers and locals,

we made use of these delightful spots, too. What a change to having to eat upon the go, and non – stop days!

Except for an occasional village, civilisation was soon behind us, and the green of the forested mountainside encased us.

Lock walls encased in numerous flora whose seeds had floated in with the water and found a foothold within the myriad of cracks within, bespoke of a canal where heavy boat traffic was no more. What a haven for the insects that dwelt within!

Dragonflies, demoiselle flies, butterflies of reds and blues flittered here and there; flowers in white, pinks, mauves and purples aligned the banks, behind which moss covered tree trunks rose to the sky, where within their canopies the mistletoe resided.

Heading into Fontenoy – le – Chateau, the channel narrowed; through lock35, a sharp bend and there was the town aligning both banks. On our right, a long quay for mooring – perfect for a night’s stop should be so inclined!

Lock La Pipee, water risen, the gate would not open. At each ecluse was a small building. Here the traveller found an intercom: should an issue occur, it was a matter of conversing with the operator at the other end. It took some time, but it was a pleasant place to wait.

At Mantroche Lock, to our surprise, the wireless poles swapped sides. This happened with regularity, we discovered, as one entered or exited each department. The traveller had need to pay constant attention to not activate the lock from the opposite direction.

17:50, La Colosse, our last lock for the day in sight. Clicker pressed, light flashing, arrive at the lock, light red, gate not opening. Bob called on the intercom.

‘We are closed for the night, sir. You must wait until tomorrow morning. Enjoy your stay at the lock.’

Lock control had closed for the night ten minutes early!

Enjoy it we did, as a path for walking ran along the canal and we had a delightful wander as the Le Coney River rushed, tripping its way downward over its rocky bed.

Not bad if we say so ourselves, and surrounded by nature, the most gorgeous of spots for an overnight stay.

With very little traffic, and what there was of it heading toward us, there was no waiting time for the locks at all, and the expected 30 minutes per lock detailed in the texts was in actuality roughly eleven for us.

Locks on the Vosges are very close together – anything from one to five kilometres apart – but mostly around one or two, so the cruiser is constantly on watch for the next post. Despite this, Bob and I were still able to enjoy the moment.