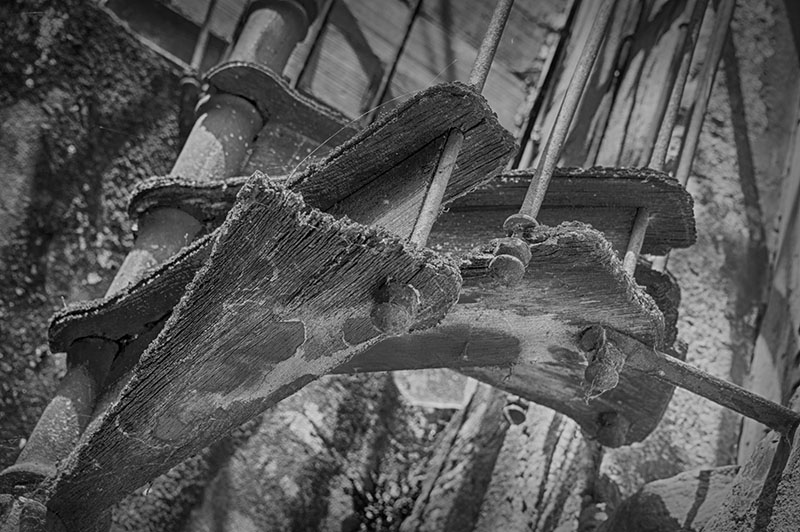 Another day of cruising past peaceful countryside settings.

A farmhouse or two,

and an old lock now used as a small pleasure craft marina.

Surprise of surpises, a black swan! Did he fly in from Oz?

Small islands lyingmid river, were obstacles to be avoided.

Highlight of the day was our three hour visit to Tournus, situated at pk 118 on the left bank heading up stream. A good – sized pontoon (closest to the bridge) was provided for the traveller – a delightful surprise and whilst a second area was provided past the bridge, it carried the warning of groins beneath.

Upon exiting the ramp, we were greeted by a Sunday market in which hidden treasures were to be found.

Into the village Bob and I sauntered. Here we were met with a wow factor. Winding, narrow streets contained homes constructed during the 16th century.

Into the plainest of churches went we.

Guess who couldn’t help himself?

Town houses with their courtyards, terraces and circular staircases: a reminder of the prosperity the town once enjoyed.

Narrow tunnels led the wanderer through to hidden streets and alleyways.

A small street of decrepit buildings with their over- hanging verandahs were a reminder of the bad times which fell upon the small community after a number of arguments with the abbot, followed by epidemics, and wars.

Today, many of the shops and residences have been given a new lease of life,

as their new owners have lovingly restored them to pristine condition, or are in the process of doing so.

The plaque upon the Eglise’s way told one of its age.

An old tower had been given new life,

and along the way there was an interesting feature or two.

At Ormes Lock, we guess the lock keeper had a slightly longer Sunday Lunch. Not answering the phone or VHF, it didn’t take long for us to discover no pontoon was provided, but those pillars for the much larger barges sufficed for a short while.

Sighting the storks that return to the region each spring was an absolute delight!

We just loved this one with the couple enjoying the afternoon warmth.

With 69km easily covered, our night’s anchorage was the small marina which was situated just behind Saint – Laurent Island. Well set up, excellent toilet and showers, free wi – fi and fuel.

And swans, of course!!! This one wanted dinner!