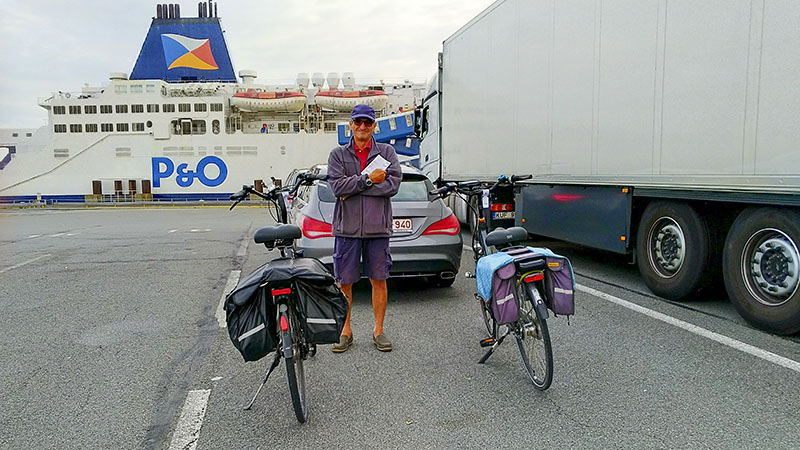 Highlight of the Day? A Bronze Age Boat!

Because of the amount of content, I have split the posts into two parts.

To make the most of our day, it was an early rise.

In the chill of the morn, we rode the bikes to the ferry terminal. On arrival at a roundabout, Bob and I t turned right and headed to the building which we believed was the terminus for bicycles.

No. We were meant to have gone straight on at the roundabout. A U – turn ensued and back we went!

Arriving at the terminus, it was a bit of a concern to discover there were no separate lanes for cyclists or walkers. We had to fit in amongst the vehicles. That was an experience in itself!

A pleasant 90 minute trip across the water soon had the white cliffs of Dover in our sight, with Dover castle like a beacon, perched high above.

The only two with bicycles, placed at the front queue, we were informed to follow the red line leading out of the ferry and directed off first. With a separate lane for ourselves, there was no worry of cars and trucks this time, and that red line led us all the way to the outskirts of Dover.

No rain predicted, what did it do? Why, rained, of course: but it was England after all!

Riding through Dover, some of the doors we saw were a work of art

and the stonework beautifully crafted.

First stop of the day was the Dover Museum and its Bronze Age Boat Exhibition. Surprisingly, it was free. Well laid out, there were large information boards, 3D dioramas and more.

Elephants were part of the force.

From remains found, it has been possible for archaeologists to form an image of some Saxon Doverons.

Highlight of the visit was the almost complete remains of a 3,500 year – old bronze age boat.

The amount of data archaeologists have been able to glean from the remains is mind-boggling.

There was a crew of between 16 and 20. This was a rowing boat as sails had not yet been invented in Bronze Age England.

At top speed with a full cargo of three tonnes it travelled at 9.26 km/h. Fully laden conditions it could travel in were 12 to 19 kn/per hour winds and 60 cm high waves. When empty, the boat could cope with winds up to 28 km/h and 1m waves. In these conditions, there would be two men bailing out the water that seeped into the boat through the gaps in the wood plank that moved as the vessel made its way through the seas.

On a calm day the vessel could travel from Dover to France in five hours.

The original length of the boat is unknown for one end was deliberately removed – probably to be reused, whilst the other only partially survives. As a result of experiments in which possible were constructed, the most likely assumption was a length of 12 m.

For oak planks were held together with oak wedges and stitches made of yew. The seams and holes through which the stitches looped were packed with moss and beeswax.

There was even a timeline on the development of boats and an image of a log boat discovered.

Incorporated into a theme around the era in which the boat was built, was information about the bronze aged peoples living in the Dover region.

When the Stone Age peoples arrived, it was on foot: there was no English Channel. In Dover, they settled in the valley of the River Dour.

At the time of people arriving in Britain, the climate was either a chilling cold that resulted in massive ice sheets covering the land or warmer epochs in which vegetation rich tundra covered the landscape. Rhinoceros, hippopotami, sabre tooth tigers, woolly rhinoceros, mammoths, bears and bison roamed the land.

About 12,000 years ago people began trying their hands at farming.

In the area where the English Channel is now found, there was once a large river into which the Thames and Rhine flowed. The waters drained into what is now the southern part of the North Sea.

8000 years ago the ice sheets melted causing the seas to rise between 40 and 45 metres to create the English channel, thereby making Britain and island.

The Romans called Dover, Portus Dubris – dubris meaning waters. With the arrival of the Jutes arrived the name was changed to Dofras, meaning crevasse between cliffs, gorge or ravine. By the time of Shakespeare the spelling had become that which we use today.

When Christianity was reintroduced to England in A.D. 597 most of the knowledge of the pagan religions was lost as a result of the church’s suppression.