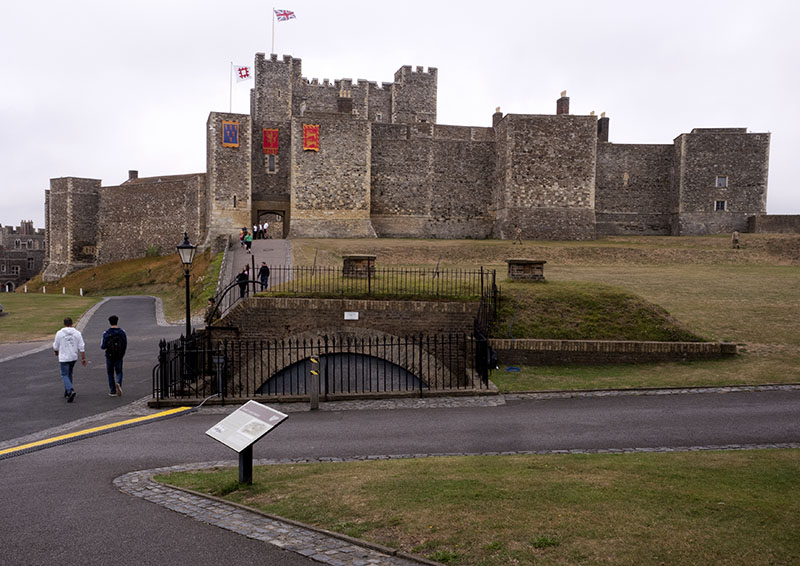 Highlight 2 of the Day? Dover Castle!

Dover castle was really three in one. The visitor discovers through thousand years of history in just a few short hours. It really is a place that requires more than a day to do it justice!

A steep climb took us to the peak of the hillside on which the castle stands overlooking Dover. On a clear day, it would be possible to see for miles.

The images below provide a glimpse into the castle’s size.

On arrival at the site, one was left in awe!

There were protected areas below ground

and the massive outer walls

and the stunning entrance.

There was a timeline detailing the history of the castle’s development. I created one image from my photos.

The Roman lighthouse has been restored. At some stage it was converted into a belltower for the church.

Situated next door to the lighthouse is the St Mary – in – Castro Church. It dates back to the 900s and is still in use today.

A plaque detailed some of the church’s latter history.

Below is a painting of the church and lighthouse from the 1700s.

Inside, the building had been beautifully restored. No matter where the eyes roamed, there was intricate detail to be found.

The King’s Gate was refortified in 1853.

The keep – or Great Tower – was constructed by Henry II during between 1181 and 1188. The following 800 years saw adaptations undertaken to cater for the improvements in weaponry and battle tactics.

Inside had creative displays.

If the weather hadn’t been so cold and wet, wandering around outside would have been quite pleasurable.

and a display about the Angevins: otherwise known as the warrior kings and queens who heralded from Anjou provided a font of information.

Eleanor of Aquitaine was an incredible women for her time period.

There were tunnels galore, dating from the 13th, 18tgh and 19th centuries. The winding tunnels are remnants from the Medieval period and were constructed sometime after 1217 at the conclusion of a twelve month siege. It was in some of these that a hospital for wounded WWII soldiers was housed. Bob and I enjoyed the tour through  the defence tunnels and sally – port.

The narrow slits were for the muskets that assisted in protecting the moat from attackers. Bob enjoyed the view.

two 9 pound cannons and 24 pound carronades were positioned throughout with the. purpose of sweeping the moat with fire.

What we didn’t have time to visit was the presentation of the ‘Miracle of Dunkerque’ which was set up in the secret wartime tunnels hidden beneath the castle and told the story of how the plan was created. To tell the truth, we were slightly warred out after travelling the Fields of Flanders.

Below are some interesting reads.