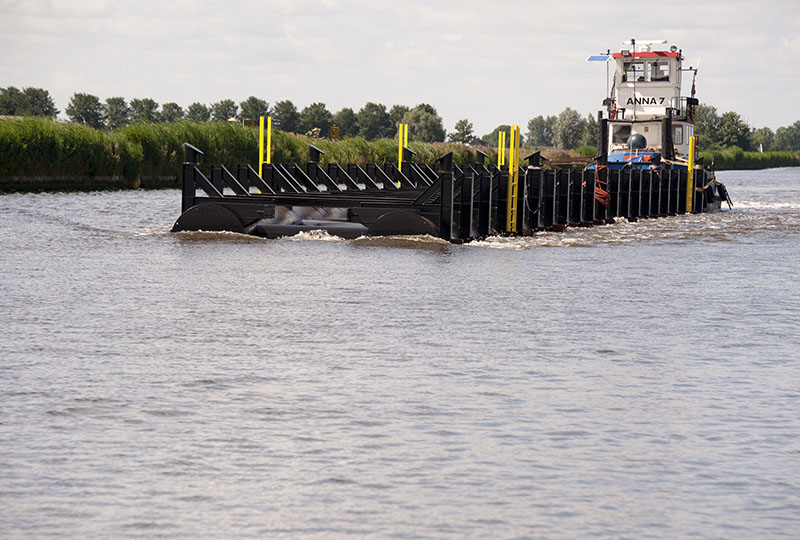 to the University and Hanseatic town of Groningen.

A bit of an interesting start to the day took place at the Grote Sluis and Kleine Sluis lock entrances. According to our book, each had their own radio channel, however, all sign posting stated the VHF 26 for the large lock. Calling this for clarification, the gentleman stated that the smaller lock must be called on VHF 22. The procedure carried out, there was no response from the smaller lock.

After making a few more radio call attempts, with the same result, the decision was made to moor so we could figure things out.

A multitude of barges moored along the banks, made it impossible to see whether a mooring was available for the smaller craft. With the space close to the smaller lock opening being congested, Gratis was moored to one of the larger vessels instead.

Another try on VHF 22: no answer ensued, so Bob contacted the keeper of the larger lock and the gates opened soon after. (To this day, we still haven’t figured the system out!)

The lines released, to the lock we motored, passing the small boat mooring so well concealed by the barges, and in idled Gratis. The small lock keeper’s hut was empty: no wonder there was no answer!!

A short rise and out we went.

No call required for bridges. A wooden structure with pole, upon which either a yellow or red button to press was placed, allowed the motorer to instigate the lifting of the bridge in. How easy could that be? With a boatie ahead of us, all Gratis had need to do was follow.

Past a small tug pushing a boat cradle.

Verdant pasture lands, where the pungent smell informed one cows were close by,

and the peaceful banks upon which people relaxed as they awaited for that ever elusive fish to take the line.

There were even man made bird nests!

Windmills, not of the modern variety, dotted the countryside. To those of us who dream of sighting this, pure heaven! Today many have been utilised to assist in the pumping of water from the lowlands.

Just prior to the lunch time bridge closing hour, we arrived in the town centre of Groningen.

Today’s excursion took us on a climb up the 97m tall Martini Tower (Martinitoren), Groningen’s highest church steeple (Tickets were purchased at the Tourist Office – look for the ‘VVV’ sign).

Containing a total of 260 steps, the spiral staircase was well worth the climb, as the view was spectacular. We even saw a few of the larger bells: in total, the carillon consists of 62 bells.

With the previous towers upon the site having been struck by lightning and burned to the ground, the current tower – constructed between 1469 and 1482, although it wasn’t until the mid – 1500s that the steeple finally adorned the top – is the third to have stood in this position.

A 3D scale model of the township. It was possible to see how the town grew upon its terp, in addition to the canals within.

Last stop of the day was a trip to the railway station: what a beautiful structure!