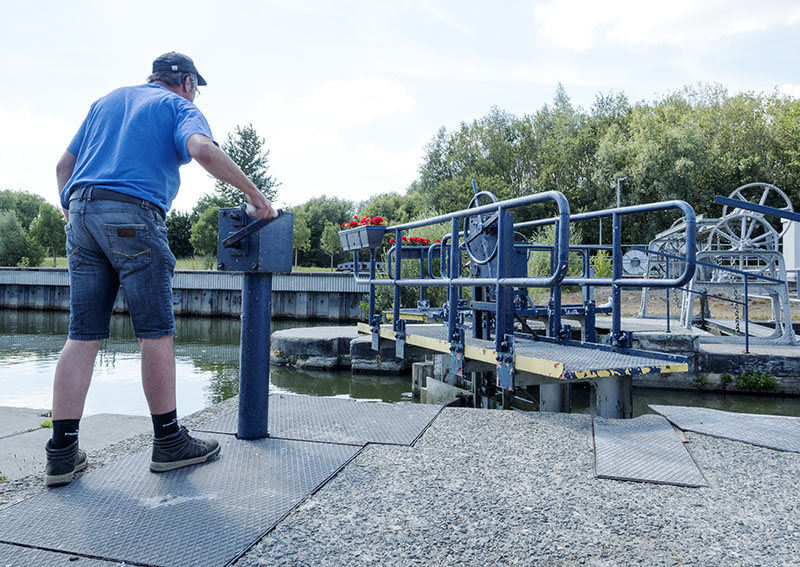 This morning Bob and I caught the train to Ath in order to check out the viability of continuing first along the Dender then the Blaton – Ath canal: the section of canal we were concerned about was that between Geraardsbergen and Ath.

Up until today, however, no two pieces of information were the same, with regards to depth in particular. The Belgian cartes noted 1.9m, whilst the French stated 1.3m; one English canal cruising site said no go unless 1m or less draft, whilst another stated 1.9m. Lock keepers on other canals had no idea either, so whereas one would say no go, the other would inform us it was ok.

Is you mind feeling a little scrambled about now? Well, ours certainly were.

After much discussion, we made the decision to investigate further, and after a great deal of searching onine Bob was the successful one to at last find a phone number for contacting the lock keepers at that end of the canal on the Wallonian waterway site.

9am was far too early for an answer, so this morning Bob and I chose to train it to Ath in order to find out for ourselves.

Would you believe the train station was right alongside of the canal and here we came across a few boats moored. One kindly gentleman pulled out a Wallonian chart book that denoted the Blaton – Ath canal as being 1.9m depth – at last, something that matched our book. This sounded promising.

Now for solving the next problem: having rung the phone number without success, it was a matter of riding from one lock to another in the hope of finding at least one lock keeper. The locks aren’t manned on a daily basis, so it was a matter of ‘hope for the best’.

It is important to note here that the bridges and locks on this 22.6km stretch are all manually operated. Heavily chained, there was no chance of oneself operating the devices. We also noted that the bollards for mooring are all placed atop of the lock wall and there was a bit of debris within the locks, but that would easily clear with the flow of water.

Sometimes, there are also a few additional visitors to be found afloat inside. These little cuties found themselves gaoled after the previous lock opening and even with the waters swirling around them, they continued doing what ducks do best: eat!!!

No – one was in residence at locks situated in the direction of Dendermonde, so a change of plans took place as Bob and I undertook a complete 360 to head south instead. A few kilometres upstream and we hit pay dirt.

There was not one, but three keepers at work as a private barge was passing through and they were opening the locks

and bridges for him.

At five metres in width, he just squeezed into the lock.

A short conversation later, we had discovered the water depth at this end was 1.8m – not bad for an exceptionally dry summer season – which posed no issue for our 1.45m draft Gratis. The other tidbit of information was to do with contacting the men for operation of the locks. That takes place at Geremonde when one is ready to continue on their southbound journey.

We also discovered that on weekdays, there are 6 groups of two that operate and 3 on Sundays. Each pair is allocated to a boat/boats and remains with them for the day to operate the locks and gates, bringing back a small taste of yesteryear.

On a high at our success, back to Dendermonde we returned, looking forward to the coming days upon what looked to be an exquisite section of waterway.