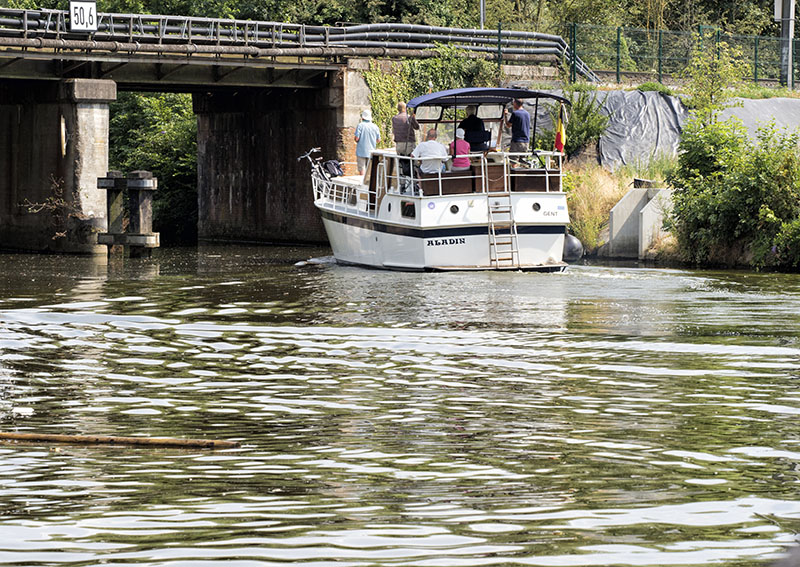 The morning found Bob and I wandering around Dendermonde. The Beguinage museum is closed Mondays, but it was still possible to enjoy the quiet of the old sanctuary.

leading into the town from the Dender had been closed, but the lock permitting entry showed signs of having been partially upgraded at some stage. With new pontoons for visitors placed in the canal, it would be additional income for the town on several fronts. Apparently there is talk regarding the lock reopening: we so hope it does!

After yesterday’s foray, the decision was made to travel as far as possible on first, the Dender River, then the Blaton- Ath Canal. Worse case scenario should the waterway become too shallow, would be the need to retrace our steps.

With only an occasional boater upon the waterway, we were reminded of the Vosges Canal: only the mountains and tall trees missing. Reeds lined the banks, and there was always a cycling track running along one bank or the other.

Believing the man operated locks and bridges only commenced at the start of the Blaton – Ath, Bob and I were most surprised to come across our first relatively early on in the peace. Small bollards had been placed on top of the wall sides, making it easier for the small cruisers. To date, the rises have only been a couple of metres max. When not working the winding mechanisms, the keepers were most happy to chat.

Ranging between 2.8 and 4.5 metres, water depths were not a worry, but some of the edges upon the bends required care  by the larger boats as they dropped to 1.5 metres in depth(not an issue for Gratis, however).

Occasionally, one receives a surprise on rounding the bends.

The initial plan was to spend the night in Aalst, just ten short kilometres down the canal from Dendermonde. With no room available on the pontoon that was used mostly by the liveaboards, there was need to continue. Bob and I found the waterway section of Aaslt to be heavily industrialised and the mooring at boat haven wasn’t the nicest. The best spots were the old barge moorings just on the northern edge of town.

On through the lock went we.

Continuing on through a few more locks,

the friendly lock keeper at Teralfene recommended a small pontoon provided by the township of Denderleeuw, a couple of kilometres ahead.

Relatively new, it was perfect for the night stay and surprisingly, there was no cost requested.