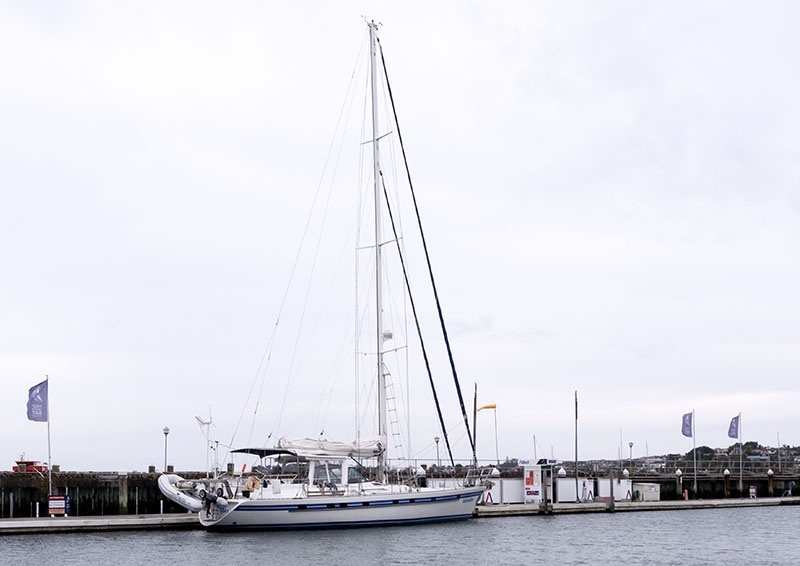 Departure day the coming day, the morn saw Bob set the engine in motion. Having started her numerous times over the past month to ensure its systems were in working order, it should have been a breeze but once more, good ol’ Murph was up to his tricks.

Looks like we’re not departing tomorrow after all. On returning from the fuel dock, on putting the gear stick into reverse, Bob discovered it had suddenly stopped working.

With the wind blowing us off, we had one chance to tie our beauty up and I muffed it, but this time it wasn’t my fault.

A line at the centre was the perfect spot for the initial tying today, so Bob had just grabbed one from the top of the pile. A light weight, when all boat systems are in working order, that’s fine, but with lack of throttle not so. There were also two other issues on the dock itself. The forward cleat was too close to the jetty’s pole, so we would have clipped the bow had it been used and there was only a ring situated at the spot where the stern line would be tied, which left me with only one option: the centre line as the initial mooring line.

With no time to search for a heavier piece of rope, Saliander was soon close enough that I could toss the line, but my fears were realised when time and again the wind blew it off. Oh for a weight on the bottom of the loop!

The last chance gone, our saviour was a kindly gentleman who on realising we had an issue came to our aid. Able to receive the lines that I tossed to him, we were able to return to our marina berth without further ado.

Bob is in the process of removing the gearbox for repair.

That aside, I managed to take a not too bad full shot of our girl whilst Bob was filling up the diesel tanks.