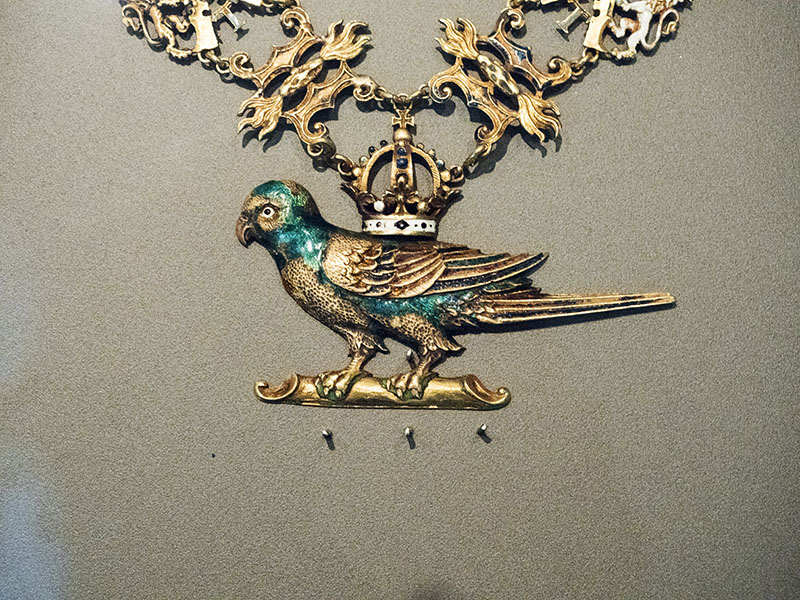 It was time to visit the museums today.

First on the rank was the Design Museum.

It certainly wasn’t what we expected, which was the changing of design and innovation in the region over the centuries. This was really a modern art exhibition showing the works of a few successful minimalist artists, through a variety of mediums that include design.

Unlike the fans, the statue wasn’t part of the exhibits, but the placement of the light behind worked nicely.

Over a span of six centuries, the Town Hall has been created from a plethora of styles that include gothic, Brabanter gothic, Italian Renaissance and Flemish Renaissance. A section from the 14th century is to be found in the cellar, whilst the construction of the most ornate segment of all commenced in the 1500s. The original intentions were for three floors, niches for 56 statues and more: only a quarter of the structure was completed, thanks to good old Emperor Charles, religious conflicts and a decline in the town’s wealth. The 17 statues in existence were only added in 1900 (unfortunately it was raining, and not wanting to get the camera wet, the shots were hit and miss: let’s just say I wasn’t happy with them).

Lunch finished and the two of us were off once more, this time to the town’s museum – the STA’M. Now that was certainly worth the visit, as Bob and I emerged three hours after entering. Set in the 14th century Bijloke Abbey, the visitor is introduced to the history of Ghent.

interactive media (this was one using a digital copy of the oldest city painting) and more were to be found.

Bob and I were most interested in noting how many gated towers had been constructed over the waterways.

Coming to the first room, a sign directed us to place floor protectors over our shoes. This set the curiosity into hyperdrive.

Into the room Bob and I ambled, only to be met with the sight of a massive table which housed a 3D model of the current town, a massive floor and wall mural of the same in colour

and computer screens that enabled one to explore various maps done over the centuries (the 16th century copy is above). We spent quite some time exploring all.

An archaeological dig had taken place in recent times.

The visitor was led through the town’s progression from early settlement to modern day.

A projected images and contour map highlighted the donks (dunes) and abbeys.

This was an image of the 12th Century St Bavo’s Abbey of which only ruins remain.

an image detailing the construction of a town bridge,

and a rare find of an early tomb were just a fraction of what we saw.

This gilded leather was one of the highlights!

No gold leafing was used. Instead, silver leaf was adhered to the calfskin, followed by a coat of yellow – brown varnish. The last step in the process was to stamp the pattern on to the leather.

It’s been a while since finding something new, but we just couldn’t miss this very different casting of a door knocker. The shadow almost resembles Christ on the cross.