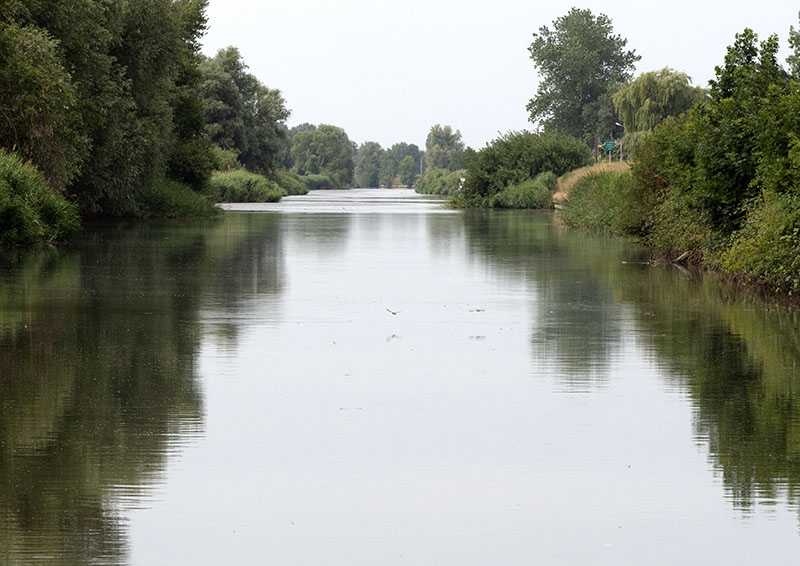 This morning Gratis enjoyed a short motor of 7km on the Ijzer as it wended and wound its way through more of the famous Flanders Fields scenery that became ever more picturesque this morning.

Waterlilies, dragon flies, reeds and, of course, the fields of crop which today were interspersed with tiny reed lined channels fed by the river. Objects to be aware of are the logs, residing like crocodiles, ready to plunge at any unsuspecting victim at any moment!

I know I have already mentioned it prior, but the birdsong is such that we have never heard in Europe before. No more unnatural deathly silence, but the continuous music of tiny birds safely hidden as they nestled within the protective bushes.

Surprise of surprises, a blue flash raced across my line of sight. Panning the camera lens in chase, I came to a sudden halt as that dash of blue came to light upon a narrow brown log laying upon the water’s edge. Click, click then it was gone! Scrolling through the images, I found they were not the best, but they would have to do. It was a kingfisher! My first captured on camera.

As with the half prior to Diksmuide, the water levels here were relatively constant at 2 – 2.4m, but there were still sections where it dipped to 1.8m for a short while.

The river is peaceful and slow moving, enabling people the opportunity to enjoy a paddle.

Arriving at Knokkebrug, where once stood the northern most walls of a now long gone Fort Knokke and there now stand just a handful of houses, a quick radio call was put through to the operator followed by a short wait  as he drove down to open the bridge, then we were through.

Here was located a small hut in which history of the fort was recorded for the visitor to peruse.

Hmmmmmm! Should we, or shouldn’t we? Normally, a canal marked as 1.5m depth wouldn’t be an issue, but this is the second drought year running and we could see the markings highlighting the canal’s usual depth. This was a good half metre down.

Sighting an area where we could moor with our stakes, Bob pointed the bow in, the intention to make it our spot for the coming days. It is at the bow that the depth sounder is connected, and as the level rapidly fell to 1.3m, the news wasn’t good.

Nothing to consider now. It would be sheer stupidity to continue further since, if waters keep falling, we could be stuck there for the rest of the season or longer……….

Turning Gratis, some dredging of the canal’s bottom took place prior to our return to the intersection.

On the right was a mooring with a limit of 1 hour only, whilst to the left was the steep incline of the bank which was fenced with a guard rail. With the first we could tuck Gratis right in out of the way between the pontoon and a large white structure set to ensure boaters didn’t cut the corner and find themselves aground: another bonus was being the ability to easily remove the bikes, whereas undertaking the latter would make life a little more difficult in that regard.

Turning our girl in order to place the bow alongside the large white marker, Bob proceeded to motor toward it, thereby enabling me to loop the bowline around the top post. With me allowing the line to run freely, Gratis was reversed slowly until at last alongside the pontoon. Lines secured, the bikes were quickly removed, then commenced the process of playing with the lines until just the smallest section of stern rested alongside the mooring, thereby allowing us some ease for disembarkment. Satisfied that all lines were secured and fenders set in place we were now ready to visit Ypres.

From here it is a 30km round journey by bike – thank heavens for the electrics! With an afternoon at our disposal, Bob and I were off…….

What a delight it would have been motoring this exquisitely beautiful section of tree – lined waterway. For much of the ride, it wasn’t difficult to visualise it in days of old. Peace and tranquillity, excepting the birdsongs and rustling of leaves in the breeze, it was a silence one would have heard on a daily basis in bygone eras. To most youngsters of today, used to the constant thrum of our cities, connection with their mates, music and so forth, this would have been unbearable, but to Bob and I it was a slice of heaven: almost like being out on the deep blue.

A quick stop as we chatted to the lock operator. Yes, we had made the right decision. Even boats with a 1m draft were touching bottom in several places further up the canal. They were pumping water from below to maintain water levels up top.

Along the pathway some interesting wool pieces were on display

and a memorial to two brothers who fought and lost their lives during The Great War brought home the fact that death and destruction took place in this now peaceful landscape.

Would you believe how many spellings there are for this town!!!!!! Ypres, Ieper, Ypra…….. and pronunciations are just as confusing. We think the locals call it ‘Ip’.

For this afternoon, no photos: just a time to take the town centre in visually. In a first, it wasn’t the church that towered over the town’s market place: instead, the cloth hall took pride of place. More on that tomorrow, though.

How was this for size!!!! They grow them big here!