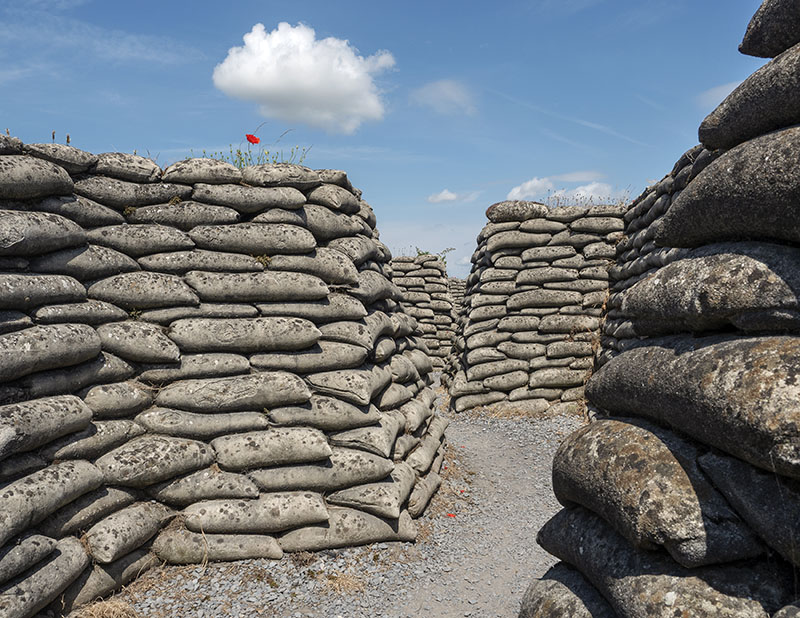 At Dodengang, the Le Boyau de l’Yser otherwise known as the Boyau de la Mort or in English, Trench of Death, was situated on a narrow section of land that ran parallel to the Ijzer, and is now the last remaining portion of the Belgian WWI Western Front.

This was where, in October 1914, the Belgian King of the time rallied his troops to prevent the last section of Belgium from falling into German hands. Over the days that followed, the territory changed hands on numerous occasions and thousands died during the ensuing battles.

In a last bid for success against the invaders, the decision was made to open the dike gates of nearby Nieuwpoort, thereby flooding the marshy plain of the Ijzer River. A successful manoeuvre, this caused the armies to turn to trench warfare in what were now quagmire conditions in the marshlands.

this stark reminder of war, where vibrant red poppies bloom, is a tribute to the conditions men suffered and those who died in their bid to retain freedom for their homeland.

Today, the sandbags are filled with hardened concrete, rather than sand and the paths hardened gravel rather than gripping mud, but one still gains an insight into the conditions these brave men suffered.

So narrow one was unable to stretch both arms out, only the shortest could safely walk upright: even today, despite the sun shining above, there was a claustrophobic feel as the visitor wandered along the passageways, through tunnels and into bunkers where the soldiers could view the enemy through thin slits in the stone. One can only imagine how the men felt when there were up to 2,500 of them.

In a letter one soldier wrote home, he described his company crawling over the dead, warm cheek touching those cold and lifeless as their limbs and bodies inched over the bodies, in the process causing the emission of gases and putrid odours in their bid to attain their section of trench. His language was so descriptive it was possible to bring the scene to life in one’s imagination.

There was a moment when the thought crossed my mind that the blood of those fallen men had assisted in creating such a fertile landscape.

The Trench of Death, itself, resulted when the Germans realised a set of oil tank situated on the Northern riverbank would provide the perfect viewing area for observing the movement of the Belgian army, and set up and observation post there. The Belgians were determined to recapture the area, and the first attempt which took place in open countryside was doomed to fail since it set the corps up like sitting ducks.

Surrounded by the Germans, there was only one option remaining: to create trenches to provide protection from gun fire and grenades. These trenches were not dug, but constructed at night using any material possible: wood, sandbags, earth and so forth. Some relative safety now provided, the leading general who was still determined to recapture the tanks made the decision to have his troops dig a trench northward and utilised the Ijzer’s left bank. Commencing on the May 18th, 1915, the soldiers inched forward by 6 metres per day. Unbeknown to each other, the German’s were doing the same.

There could only be one result!!!

Why was this region so critical to both parties? There were only a few areas where the enemy’s defences could be infiltrated, thereby altering the war’s path.

Did the carnage end? In a nutshell, no!

The Belgians had at last decimated the fuel tanks and, in a last ditch effort to prevent further night attacks by the Germans, the dike protecting the flooded polders from the Ijzer was blown to smithereens in October 2015, thereby allowing additional water to further flood the area and separate the two armies.

The attainment of ground at a standstill, the two armies settled in.

It was around this time that a trench specifically for fighting and another to be used for the supplies, entry of reinforcements and evacuation of the wounded were dug by the Belgian forces. To enable ease of movement for the supplies and injured, small wooden rail tracks were also constructed. In addition, they also built an impregnable fort from which machine guns could be fired and another section – later called ‘the mousetrap’ – that was set with barbed wire, wire netting, observation peepholes, firing bunkers and more: all to prevent a surprise attack.

And still the battle raged, the Germans now incorporating the use of the deadly mustard gas shells that oozed the tendrils of their noxious burning contents across the Trench of Death, killing thousands and leaving just as many damaged for life. All the troops could do was encase their faces in gas masks each time the shelling commenced.

Until the armistice was called in 1918, this was the daily life suffered by both armies ————-