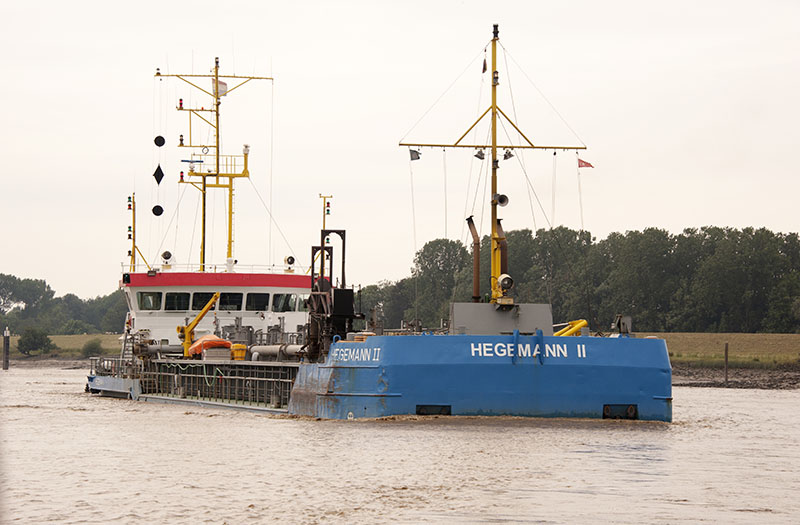 Exiting the Dörpen lock, we moseyed down the last three kilometres of the Kustenkanal to its intersection with the Ems River. At first glance on approaching, it looked a little confusing with its four – way intersection. Fortunately, well sign posted by the authorities,

the map and chart plotter at hand, our right turn went without a hitch.

The journey today proved to be interesting from the moment of our arrival at Schleuse Herbrum (km 212), the lock from which we would enter the tidal Ems River.

Few pleasure boats must travel this particular section of river, since there were no moorings at which they could wait. Set up for the large barges, it was impossible to correctly tether our girl, so with the water movement affecting Gratis as it filled the lock, Bob and I eventually untied and just waited it out under motor. In addition, the lock itself, was also set for the much larger vessel, so bollards were far apart and the water rush as it emptied much faster than those encountered since departing the Rhone.

Having checked tides for the region, all should have been well on our exit into the tidal river at two hours prior to low tide – and with the tide in our favour.

Not so, we discovered!

Expecting a depth in excess of 2.7m (this was the recorded depth on the chart at the lowest mean tide), surprisingly the chart plotter displayed 1.7m depth as we simultaneously heard – and felt -the keel scrape bottom. Bob was pretty sure we were dragging sand, Engine revs increased, it was all Gratis could do to make headway.

To top matters off, a dredge was working and taking up half of the channel! With sand banks either side of the narrow waterway, we crawled along at snail’s pace past the dredge.

This very narrow channel had obviously suffered massive silt build up and no wonder the dredge was hard at it. Just another 200 m further on another dredge was also clearing sand!

Thankfully, this serious lack of depth only lasted a short distance, and it wasn’t long before there was enough water that, in tandem with the push of the outgoing tide, Gratis was hiking along at a good 12 – 13km/hr!

For the cruiser motoring along both the Weser and Ems, many pleasure boat harbours situated in these tidal waters are to be found behind schleuses. Unless you wish to find your boat sitting upon the mudflats at low tide, it is best to arrange your motor around the tides and schleuse opening times.

Large turning circles are created for the barges. This one appeared to be quite shallow.

And a little more……

By the time of our arrival outside the Papenburg lock some fourteen kilometres later, the depth had increased to 2 metres. Although still some way below its lowest mean tide prediction of 3.1m, Big Bertha was no longer working quite so hard.

Upon sighting the schleuse entrance here, it was with a sigh of relief that we were glad to have altered plans. Now we understood why the lock here only opened from the two hours prior to high tide until two hours after high tide.

Having made our way past the channel that led to the lock, the water immediately rose toward its expected minimal depth of 3.1m (at the lowest possible tide). The level was now only reading 2.7m – 3m depth, and there was still a further hour to go before the low on what was to be one of those low water tides!

Papenburg was also the place at which the waterway kilometre numbering returned to zero, as this was the point at which the map was now recorded like a sea going chart – in actuality, the smaller seafaring ships do make their way this part of the river as we found further on down the Ems.

Kilometres 6 – 8 made for another interesting section as we wended our way past another two dredges at work.

We were caught behind this dredge for a while, as it was about this time that the river became deep enough for the large barges to run once more.

A couple of notes for the cruiser:

Despite the initial issues, observing the change in landscape as it became covered in lowland marshes, rather than wooded forest areas, helped to pass the time.

As the river widened, it was with relief that we noted an improvement in conditions, despite the tide being against us. To our surprise, arrival at the Oldersum Schleuse took place at near 5pm, much sooner than expected. YCU Oldersum was situated right at the entrance way of the channel to the lock. One was required pass the club and head right up to the lock’s entrance.

Immediately outside the entrance to this schleuse, a few bollards were found within the 25m of the gates.

Initially using the VHF channel and being told to wait while the lock was prepared, 1½  hours later – with the tide having turned – we resorted to the telephone. We don’t understand what happened, but the gentleman Bob spoke to had no idea we were waiting.

Within ten minutes – this was a slow filling lock – the gates had opened and in Gratis motored. I personally found this the best mooring system yet: a pontoon that rises and falls just a few metres, all one need do is connect the bow and stern lines, then wait whilst it does the hard work for you (unfortunately not practical for the heavy barges).

Once in the Ems Seitenkanal, a mooring pontoon was directly outside to our port side. Day’s end, that was our stop for the night!!!