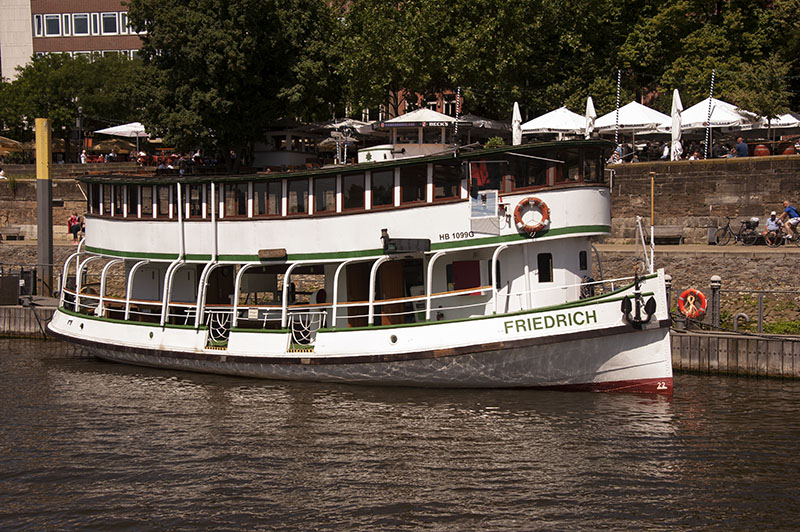 At one stage, the air became a mass of black as two massive flocks of black birds took flight. It appeared as though they were searching for thermals. Without success, the hoard unexpectedly dove into the trees. It was quite a sight!

The river banks became the drink and play area for a herd of horses. Even though not wild, there still appeared to be a leader. The front horse in the image on the left, splashed his hoof in the water several times, then when not seeming to receive the expected response, proceeded to forcefully push the horse next to him towards the bank. This action completed, the remainder of the herd in the water also departed. It was only when he remained, that this ‘leader’ joined the group.

Large ships work in these waters,  of Bremen so one must be ever vigilant. The last kilometres of the Mittelweser and motoring into Bremen, we found the barge captains putting up the blue squares that inform the boater to pass starboard to starboard.

Three locks for the day, but quite simple. What a difference that hook makes!!!

The only issue we encountered were large rectangular lengths of wood attached to the left side of the larger Bremen Schleuse. Floating on the water, they were set in such a way, they went up and down with the water level.

None of my reading had notified me of this, so we went in unprepared. Lowering one of the fenders as we went, I was telling Bob to take it slow whilst also preparing to attach the hook: three jobs at once in this situation was not the easiest. One line attached, it was then possible to readjust the remaining fenders to water level.

The lock keepers were pretty patient, and waited whilst the modifications were made. With a depth range that is dependent upon the height of the flow, the lock rises and falls depths from 2 – 6 metres.

Arriving at high tide, was perfect and meant a short drop of just two metres. Out of the lock and what a landscape change! The banks had already shown signs of sandiness, but now in the tidal section of the Weser tiny beaches and marshes were frequently passed.

A short few kilometres and the farmland and geest was soon left behind us, as the township of Bremen took on form.

We loved some of the water craft.

Isn’t this one a beauty!

First glimpse of the Alt Stadt.

With plenty of boating clubs to choose from, we decided on YC Hansestadt. Almost opposite the Altstadt, friendly people, and protected from both the tidal rush, and wash of passing boats by a small ‘island’, the visitor can’t want for more!

Bremen is a town with a long history. Evidence of settlement in the nearby marshes and moraines have been dated as far back as 12,000BC.

The early 1820s had the forward – thinking rulers of Bremen realising the increase in the shipping trade meant the ships were only becoming larger. It wouldn’t be long and the harbour area of the shipping town would no longer be deep enough for these vessels. With this issue in mind, the port town of Bremerhaven was founded some sixty kilometres away, at the mouth of the Weser, in 1827 as a measure to deal with the loss of traffic for the inland city.

Today, it’s both a commercial, and industrial, city that houses close to 2.5 million people.

For more of a read, check this out.

The town also has a great tourism webpage.