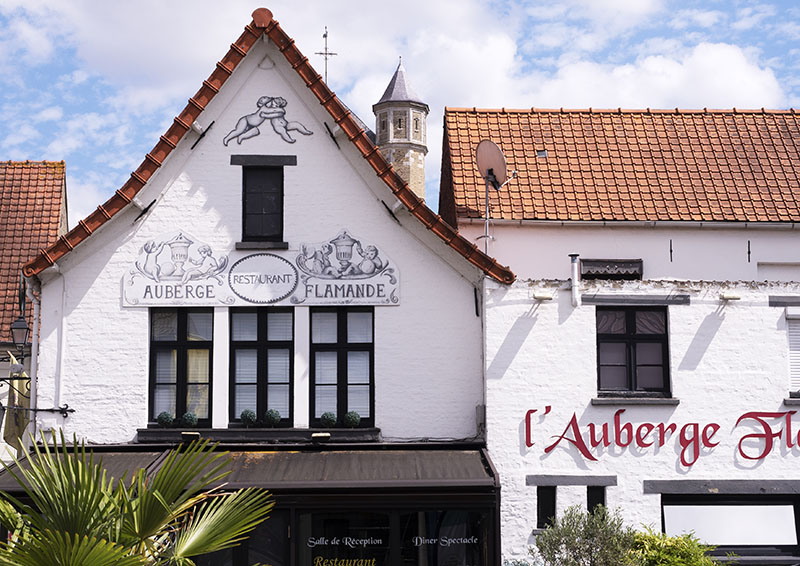 After two days of rain, the skies cleared and at the first opening of the bridge for the morn, Gratis was up and ready.

This was another of those trips repeated from last year, but it was a pleasant six hour motor that saw us deal with three slow locks in the 30km or so travelled.

From the turn into the River L’aa, it is only a further 30 plus kilometres to Calais, only the water depth drops from 2.5 plus metres to 1.5m: this means much slower travel.

There are also two locks on the Canal de Calais and that adds time to the journey. In addition to the locks and depth, the only mooring on this section is recorded at 1.2m depth – in the book.

The result? We chose to forgo the 60km day.

In preference, we chose a spot discovered last year: Relais Flandre – Artois in a small side channel,  just opposite the township of Watten.

Watten itself is a small village, whose written records commenced during the 800’s: in what is a small township, that is a feat in itself after the destruction created by two world wars. Over the centuries, Romans, Francs, Germans and so forth resided.

Hi atop the hill, Mount Watten, overlooking the thriving city below, a small chapel had been constructed during the settlement’s early days. It was here where the priests later arrived, and over time created an abbey with church. Today a ruin, it has been incorporated into a nature park where the walking enthusiast can spend time ambling the paths. Sadly, with Bob’s knees not up to it, we didn’t undertake the walk.

Today, the main church is positioned midway down Mount Watten.

Bob and I liked the way the newer stained glass windows, remembered those who died during the wars.

On our amble through the town, Bob and I came across remnants of the old canal that once surrounded the walled village. Today, it’s been filled in and a park area created. An original lock has become a segment of walking path beneath its bridge, whilst a little further on, a second bridge rises up and over in the centre of the park and unless one makes the connection, it seems quite an anomaly.

After several years where bumble bees have been miniscule in size when compared to those of times past, and sightings practically non – existent, there was a nice surprise this afternoon on finding a number of bushes covered in the large beauties.