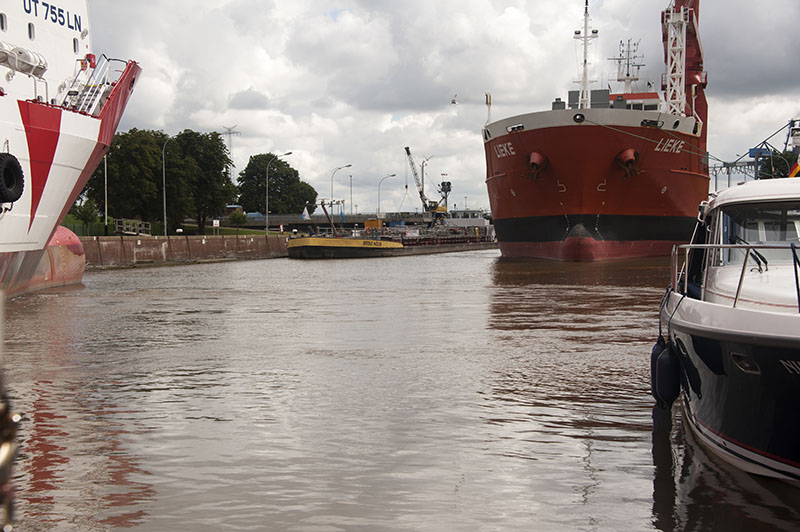 The weather cold and dreary, appearing ready to rain, we had departed our mooring in Emden by 09:00.

Schleuse contacted, at that point, we were informed they would have it ready for us. On arrival at the gate, a quick radio call – it’s VHF 13 here – and the massive structure gradually slid open.

Ahead of us, the gaping entrance was so large, it was practically impossible to make out the mooring area. Had it not been for our walk to investigate early on in the peace, we would have been flying in blind.

Along the wall sides, massive pontoons of wood are attached to the sides by heavy chains and on the outer edges of those closest to each gate are mooring rails. Within the corners of the wood have been cut holes and this was where the chain had been threaded, thereby allowing the pontoons to rise and fall with the water level. Small bollards are inset within the walls, but these are placed at such a distance apart that they really only suit the barges. In addition to this, massive bollards were set well back from the wall’s edge: they were for the large ships that have need to enter the harbour.

It turned out that the lock is operated around the movements of the ships and barges. Upon entry pleasure vessels are instructed to moor either at the front or rear of the lock: it all depends on the order in which they are told to enter. In this case, we were first in, so went right to the front. Because of her length, Gratis was moored with a bowline on one of the small inset wall bollards and stern looped through a mooring rail. All fenders were lowered to the waterline in order to prevent the hull from rubbing, although with the ship closest to us refusing to moor and instead using his thrusters so as to remain against the side our protection was practically useless.

In came the first of the ships –

Followed by a few small boats,

another ship and a barge. Believe it or not, there was still room for mor!

There was time to watch the birds as they raced and dove for their easily earned breakfast. Due to their speed the photos aren’t the best, but they give you an idea!

An hour and a half later – yes it was a bit of a wait until the ships arrived – the sea gate opened and out Gratis motored in the massive lower section of the Ems.

A wide, open waterway – even with the now low tide – carried us along beautifully. Although a little rocky as a result of the wind against current effect, it was still a perfect one hour trip.

A short 10km or so later, Gratis was motored into the channel that led the mariner to both the Eemskanaal opening and Delfzijl. We had entered the Dutch province of Groningen!

Rather than passing through the lock, the decision was made to moor in the Zeilvereniging Neptunus marina, where the depth at low tide is listed as 8 metres.

This was very different to the upper region of the Ems River, where the waterway was rather narrow and shallow, and nothing like the Garonne which ever raced in at greater speed. Whereas it was possible to easily turn Gratis into position once in the marina here in Delfzijl, on the Garonne full engine power would have been required – and as those of you who remember our experience at Begles not always possible (

With fuel dock, water, power, showers and washing facilities, it was well worth the stay.

There was even time for an explore.

Through the old arched gateway went we.

A large number of landscape paintings were to be found: either on fabric

or in wall murals.

A statue or two,

This particular figure was an interesting depiction!

And a windmill completed the tour.