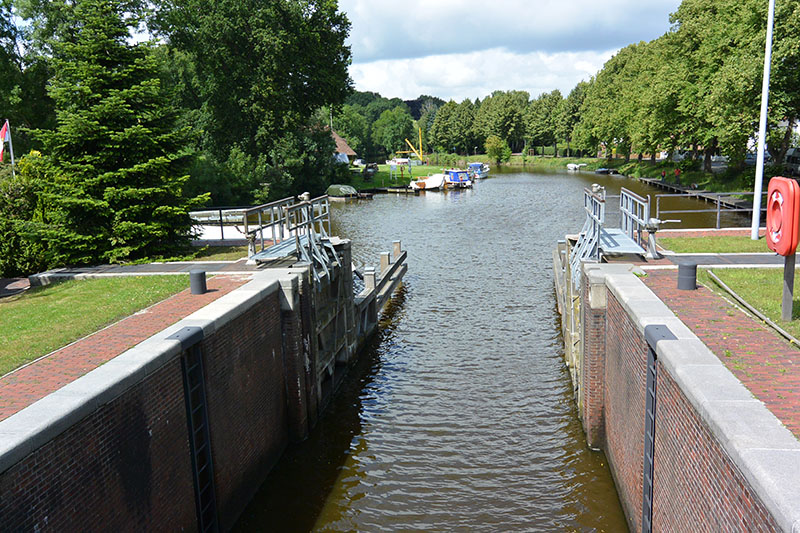 An explore of the township today. Emden is only a small town, so it didn’t take long to come across the interesting highlights.

It wasn’t that many decades ago that lighthouse ships like this one below were stationed out in the North Sea. No matter the weather or height of the seas, the people that manned them were on board 24/7 until their stint ended.

Riding along one of the many canals, we came to the four – way Kesselschleuse. Through this, we shall pass on our way to Aurich.

Its literal translation meaning, ‘boiler sluice’, this is a truly unique structure in that there are four waterways, each with differing water levels.

The duration of the sluicing process depends on the difference in the water level to be overcome since a corresponding quantity of water must flow in or out through the contactors. The water level is compensated for without the use of pumps. A lock gate is responsible for the inflow and outflow of the water, which is controlled by opening or closing the correct contactors.

The boiler sluice was designed by the rather unknown Berlin government architect Wilhelm Germelmann and went into operation after only ten months of construction in February 1887. The original form at that time, however, had only two lock chambers. However, their capacity was soon exhausted, so the lock from 1911 to 1913 was expanded to its present form. From 1982, a general renovation took place, which lasted eight years and was more like a new building. It is still the only construction of its kind in Europe and is a protected monument.’

Sign pointing the way east to Aurich, our next stop.

One of the old bridge stations maintained beautifully. Most structures here are made of red brick.

Ostfriesland, known to the English speaker as East Frisia, is located in the northwest region of the German State, Lower Saxony.

With twelve hundred years of written history (according to Roman writings the region was well occupied during the Biblical times), life here has always been linked to the sea and seaports. It is also believed that migrating Saxons arrived from the east, and Frisians the west.

The majority of non – Europeans picture Germany as mountainous, but this is not the case. Surrounding Berlin was a massive lake and canal system. Here in Ost Friesland, the visitor encounters lowland meadows – much like those of the Netherlands – upon which Frisian cattle and massive fat sheep feed, covered in a sheet of brilliant greens. Today, sandy heathland, described as ‘Geest’, and marshes are interspersed with fields of Rape – the plant from which Canola was modified.

Today, drehbrückes (swivelling) and klappbrückes (lifting) that cross the waterways, dot the landscape. With bridge heights ranging between .80 and 2m, most water travellers have need to radio ahead in order for the bridge operator to make the waterway passable.

In the western region of Ost Friesland, these lowest of bridges low and shallow canals mean that even Gratis, with her shallow draft of 1.5m and minimum height of just under 3m, is unable to pass. Exploration here is by dinghy, bike, or foot.

Museums, old mills – many still in working condition, and lighthouses dot the countryside, whilst the coastal region has become an ecological centre, with nature parks all round. World Heritage, the Wadden See is a must. Weather permitting, we may get to ride there this time.

Over the past days, Bob and I have discovered the norm for the weather are cloudy days covered in a mix of misty rain or steady downpours as the lows remain stationary overhead.

The language here is very different to the German heard elsewhere. In fact, it is impossible for the non – Friesian to follow, and although close to Holland, there is practically no similarity between the two.