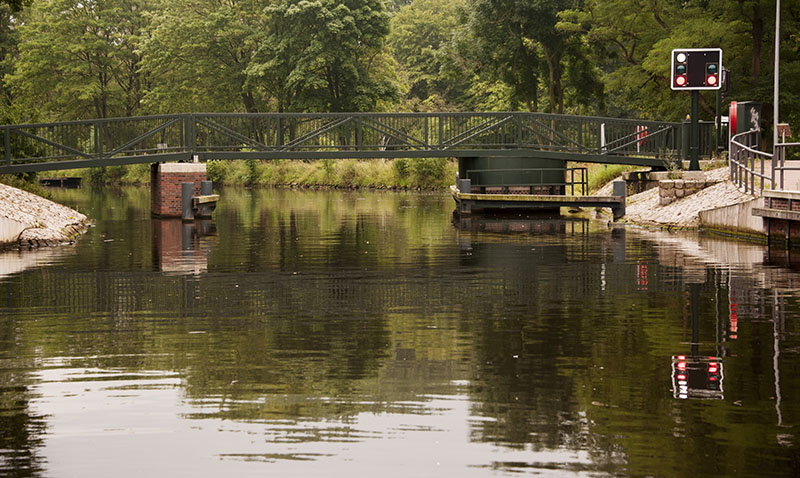 This was our day for journeying upon 25km of the Ems – Jade Canal to Aurich and a delightful one it was too, with its lifting or turning bridges, and a lock or two.

The kilometre markings at the commencement of the journey slightly unclear, and no names on the bridges, the first of the operators I rang was one too soon (km 2 in the book was actually km 1). I must have really murdered the name of the bridge, as he didn’t pick up on my mistake and requested that we wait until 10am.

The allotted time came and went, and no bridge lifted.

On motoring up to the structure, we discovered a phone number painted upon the steel. Whilst in the process of ringing this new number, the first gentleman rang in confusion from the fact that we hadn’t appeared.

This kindly man could have ranted and raved, but not he. Instead, his direction was to contact the number written on the rail bridge, then ring him again once we were through.

Having passed through the first set of Klappbrucke, I was about to make that promised phone call, when Terry informed me the bridge was lifting. Upon looking up, there was the gentleman awaiting us.

From that moment, the trip was like a dream, with the operators friendly and helpful. Each keeper phoned ahead and all went like clockwork as we passed through either lock or bridge opening.

Except for the first three bridges after the Kesselschleuse which are run via videolink, these bridge operators have two or three bridges to run and a bicycle with which to run to and fro. This is so ‘old world’ and may be a little slow for some people, but it’s all part of the experience.

Don’t you love the hut that has been so beautifully restored!

Having passed the outskirts of Emden, except for the occasional farmhouse or factory, it was just us in the countryside,

and exquisite it was.

The operator of the white one on the right had no lights for letting the cruiser know when to pass through. Remember the train guards of old, with their hand held discs of green on one side and red on the other? That is what this gentleman used. Like a midget against the bridge, it was practically impossible to sight him, and that was only done at the last moment as he waved the red sign. Other boats were heading through from the opposite direction.

We have never seen so many geese. There were literally thousands!!! Some weren’t too happy that we disturbed them.

In areas, the bank retainment was being repaired: to our surprise, they are still using wood.

In the final approach to our destination, the banks became tree lined, and finally at the 25km mark, we arrived at the new harbour of Aurich.

A short distance past the final lifting bridge of the day, there was a channel upon the left, and it was to here that we were directed. At .38c per metre, this was our cheapest marina cost by far. There were also toilets and a shower: what bliss was that shower! One euro gave us hot water for a good 5 minutes.

Aurich is a beautiful township situated between Emden and Wilhelmshaven on the East Frisian Peninsula.

Once covered by bogs and Geest, today the land is a mix of forest, moor, and heathland, much of which is used for farming. The initial township commenced its life upon the highest section of land in the region.

Sadly, even this town was marred by the horrific effects of war. Most buildings destroyed, it has been rebuilt over time. Thankfully for us, some structures remain from the early years. Upon arrival, time was spent ambling the old town centre.

The Royal Stables, constructed during the late 1500’s, are Aurich’s oldest remaining structure, whilst the remaining palace is of 19th century origin.

Bob had some fun.

This 25m high futuristic looking sculpture, the Sous Tower, was constructed during 1990. Apparently, it’s not admired by the locals.

We loved the finishing touches.

In a front garden were a number of sculptures created from metal.

The market had a mural,

or two, or three.

Bears were found in various places,

whilst a farmyard chicken set with movable parts were to be found in the main clothing street.

In the glasses store there was the puppet,

and walking past the butchers, we came across the Dodo birds.