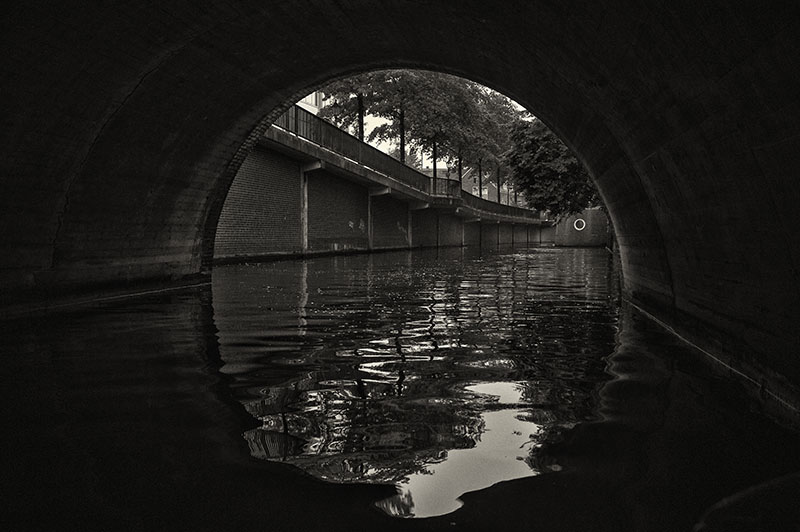 Little G2 was readied for her first sojourn since late last year. She was perfect for today’s trip, since we could motor beneath even the lowest of bridges.

Past the new harbour, where we saw a lift or two for the large ships.

Under the first of the bridges,

past the Alt Harbour,

another bridge or two,

and a gentleman fishing for who knows what!

The Kesselschleuse here uses telephone rather than VHF so, on arrival at the lock, a quick phone call set the wheels in motion. The poor girl was so confused. It took Bob standing up and giving her a wave, for the lass to sight us alongside the mooring.

Schleuse opened, in we motored.

A gentle 2 metre drop, and out we puttered. How different is the perspective from down this low!

These are waterways quite different to those we normally travel, for these northern canals can be likened to those of Venice: they were the original roadways for these peoples.

Having exited the lock into first Emder Statgraben, then Alteremder Stadtgraben, we wound our way through the township.

Hardly underway, down came the rain! Between breaks, we waited beneath the bridges, attaching to any nook and cranny we could find.

Along the Larrelter Tief, at 2.0m depth, we moved well.

Past tiny townships – weighing the distance between bridges and shelter as rain continued to threaten, this was where the sound of vehicles and people gradually lessened, until all that could be heard was the song of the birds and Little G.

The last of Emden behind us, we found ourselves in farming country. With the pong of the cattle beyond belief and the much narrower waterway, it was possible to glean an insight into what the early people’s experienced!

A couple of hours so later, into the 1.8m depth Knockster Tief Little G turned,

followed soon after by taking a left fork into the Pewsumer Tief which had said depth of 1.3m.

This was where the information within the books significantly differed to actuality: our friend Dieter was most correct when he informed us the waterways no longer in use by the commercial barges were sadly being let go.

What an opportunity the Germans are missing in cruising boat tourism, for they truly have a real gem here! Dredge the main waterway leading from Greetsiel to Emden, in addition to those running up the centre from the Kustenkanal to the Ems – Jade Kanal, thereby enabling a sea free journey; raise a couple of bridges, charge a yearly fee like the French do to enable continued maintenance and it would be perfect.

Speed slowed (depth of water assists in determining speed), at times dragging bottom, and playing dodgem with the reeds growing mid – stream, this canal was certainly not 1.3m.

Some time on, around the outer edge of Pewsum the waterway wound.

Pitstop required: halt, a clamber up a stony slope, an Italian restaurant discovered, there we stopped. Delicious pommes fritters, a drink, pitstop, another scramble – this time downhill, and we were off.

Into the Neues Grietseeler Tief motored we. 1m depth??? What on earth was that?

Aged crumbling bridges, the soughing of the reeds,

water birds balancing precariously, only to undertake the most ungraceful of dives as the bow wave met the side,

cows grazing: all made for a pleasurable afternoon.

The original plan, a 16km two – three hour motor to Greetsiel, came to an abrupt halt. With 4 – 5km travel remaining until the port town was attained, it was by now 3pm. Between the rain and the much lower than expected levels within the waterways, our journey had slowed to that of snail pace as Little G, with a draft of between .5 and .8m – depending on speed and the load she carries – continually dragged mud in the latter canals.

Weighing up the state of the waterway, the hours we had been travelling and the early lock closure time in Emden, it was time to commence the return journey home in order to not miss the 5pm deadline! So close, and yet so far!!!!!

The plan to return via the full length of the Neues Grietseeler Tief, became a ‘no go’ as its water level was well below the 1m documented and slowed us considerably. The Hinter Tief which was to have been entered later at .8 recorded level can be presumed to be well below!

Back the way we had come – in less than half the time, would you believe it!

Amazing the difference no rain makes!