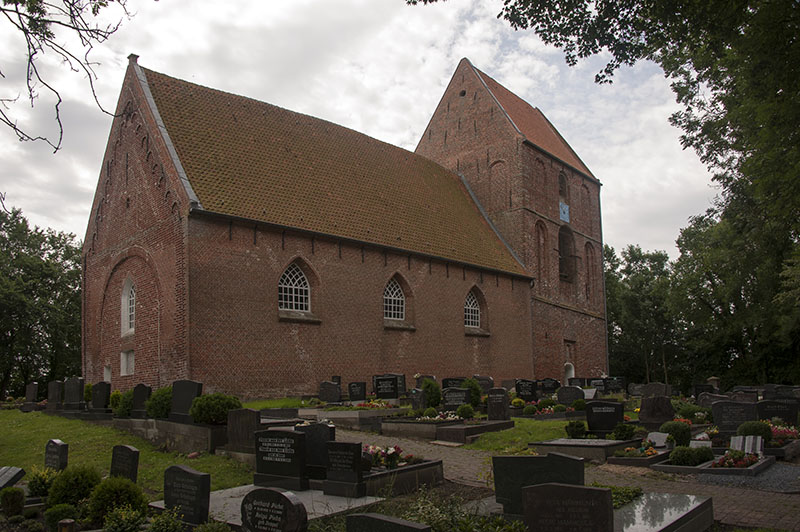 Although a little windy, the weather seemingly cleared it was around mid – morning that Bob and I made the decision to go exploring by bike.

Our destination, Norddeich, is situated on the North Sea coast and was approximately a two – hour cycle.

One of the sights we love are the rail booms with their chain skirts.

Having exited Emden, which is quite a small town, we were soon surrounded by farmland and rode beside narrow channels that ran along the street edges. Riders, make sure your behinds are provided with a well cushioned seat, as the bicycle lanes here are full of dips and rises.

Six kilometres on, and we were led over a bridge that crossed the main road to the town of Aurich. Imagine our surprise when, over the tree tops we espied an old tower that leaned further than the Tower of Pisa. Well, Bob and I just had to investigate!

Forgetting about the directions from the GPS, into the small town of Suurhusen rode we!

As Bob and I often discover, the unexpected gems are generally found when one heads off the beaten track. This was indeed one of those times.

On arriving at the tower’s destination, we discovered it to be part of the town’s evangelical church – no, it isn’t the lens angle causing the lean this time.

Realising the church was open, in Bob and I went.

A 3D map of the town. The church is placed on the highest piece of land.

The clock pendulum and its weights, is would up every couple of days.

Bob as he walked through the door.

There we were met by an ex – farmer who was looking after the church for the day. What a font of information he was.

A board detailing the ministers of the church since the 1400s.

Each of the pew stalls was designated to a family who was then required to maintain it. This particular family line has died out, but several others are still here today.

Along with its wooden ceiling, inside the church itself was extremely plain. Once Catholic, upon the conversion to Lutheran, anything decorative was removed.

All the woodwork was hand carved:

The ex – farmer with Bob.

See the metal rods within the brickwork? Below ground, pylons have been placed to prevent further tilting of the tower (see information below).

The town has also seen its share of floods.

That of 1984 was minimal. In the second image our new friend is showing us the level of the 1717  flood, but that wasn’t the worst!

At Christmas time in the year 1770, the sea waters inundated the land to such an extent that ships came right to the doorstep of the church. Being on the highest land in the region, it was the only building not destroyed.

Back on board Gratis, I delved a little deeper:

Initial settlement of the township area took place prior to written documentation, so its early history has been lost to the annals of time. Within the old church tower was found a stone dated with the year 1004. The first official documentation took place in 1255 when the ruling chieftain of the time signed an agreement of peace with Norden and Bremen.

‘The 13th century Brick Gothic church in Suurhusen is reminiscent of the old fortress churches. Originally, it was 32 metres long and 9.35 metres wide. In 1450 the church was shortened by about a quarter and the tower was built in the space. This tower currently leans at an angle of 5.19°, compared with 3.97° for the Pisa tower after its stabilization.

According to local historian Tjabbo van Lessen, the church was built in the Middle Ages in marshy land on foundations of oak tree trunks which were preserved by groundwater. When the land was drained in the 19th century the wood rotted, causing the tower to tilt. The steeple was closed to the public in 1975 for safety reasons, and re-opened 10 years later after it was stabilized.

From 1982 onwards, the tower was renovated in a private initiative, the foundation being uncovered and reinforced with concrete and steel. On October 14, 1985, the church was reopened with a feast service. However, the inclination had not been fully stabilized, so that in 1989 additional safeguards were required. Since the mid-1990s, the sinking of the tower has been regarded as suspended.’

During 1977, the tower was placed in the Guinness World Record book when the tilt measured 5.1939°.